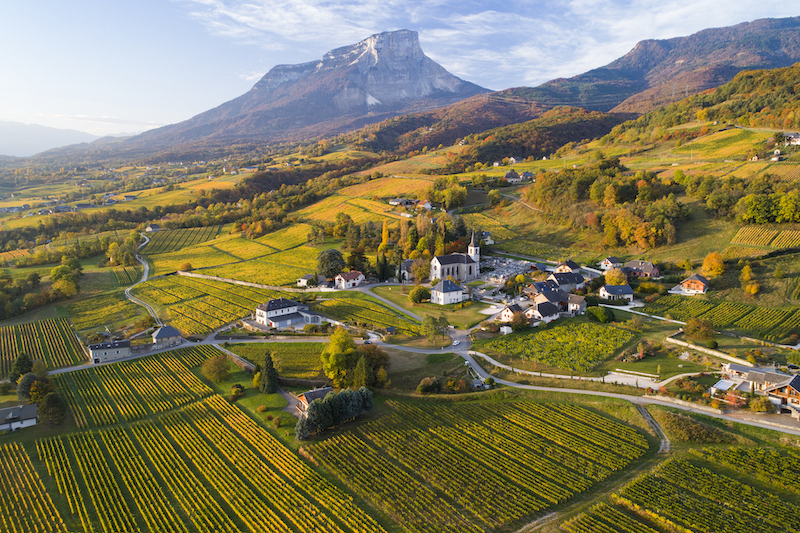 Savoy is France’s smallest wine region and has made a name for itself as a fount of zippy white wines, whose light, fresh characters have made them undeniable crowd-pleasers. Altesse and Jacquère are the star performers in the region’s mountain vineyards, and here’s what to expect from them.

“Savoy wines have a bright future ahead. Global warming is benefitting our red wines and their iconic Mondeuse grape variety. For the whites, Jacquère and Altesse account for 350 and 880 hectares respectively out of our 2,000 hectares under vine. We have a range of twenty endemic grape varieties that produce low ABV wines and that’s undeniably an advantage for us”. Franck Berkules, communications manager with the Savoy wine marketing board, waxes lyrical about the region’s wines, also pointing out that exports have risen from 2 to 5% due to a surge in the British market, which now outperforms Belgium, long the leading destination for Savoy wines abroad. “85% of our wines are now shipped to the American and Canadian markets, then to Japan and Asia. Sweden and Norway are also keen to tap into smaller wine regions with great diversity. The economic crisis and spiralling prices of Burgundy, too, have been a bonus for our white wines”, he comments. 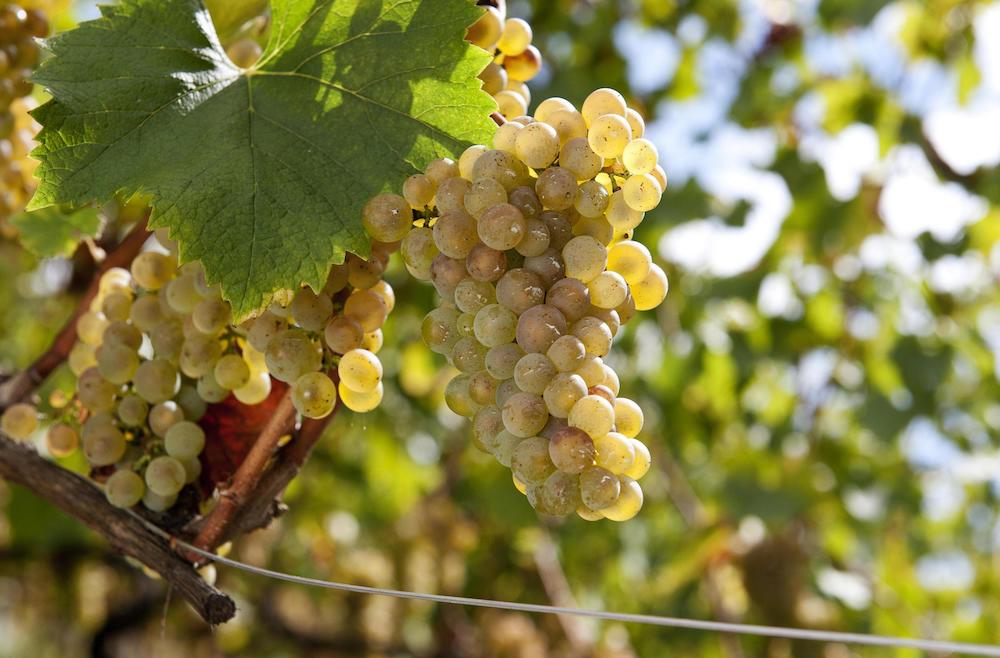 The vineyards of Savoy are divided into around twenty small ‘islands’ or geographical strips in four departments across the Auvergne-Rhône-Alpes department – Savoie (80%), Haute-Savoie (8%), Isère (8%) and Ain (4%). In Haute-Savoie, vines grow along the southern banks of Lake Geneva (Ripaille, Crépy, Marignan and Marin), the Arve valley (Ayze), the Usses valley (Frangy) and along the banks of the Rhone (Chautagne). They are also planted along the western slopes of the Mont du Chat (Marestel, Monthoux, Jongieux) and the Cluse de Chambéry (Monterminod, St Jeoire Prieuré, Chignin, Chignin Bergeron, Apremont and Abymes which spills out into Isère). Lastly, the geographical designations Montmélian, Arbin, Cruet and St-Jean de la Porte face South-East along the right banks of the Combe de Savoie. “Altesse is the grape variety grown in the Roussette de Savoie appellation area and its four designations – Fangy, Monthoux, Marestel and Monterminod – but some winegrowers do not label it with a designation”, explains Berkules. 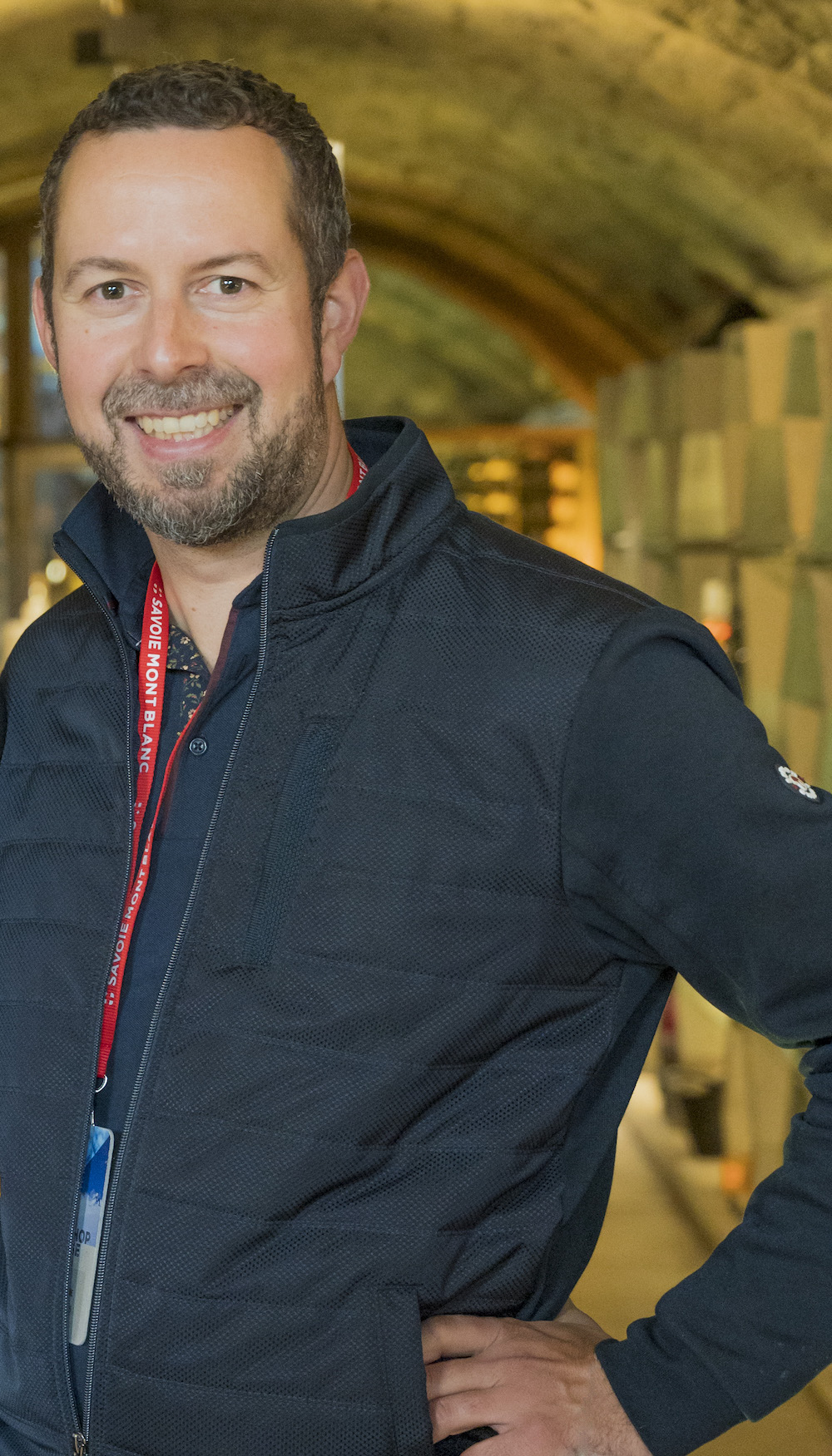 FRANCK BERKULES, HEAD OF COMMUNICATIONS AT THE SAVOY WINE MARKETING BOARD

Altesse and Jacquère are long-standing Savoy grape varieties. “In my opinion, Altesse probably came from Austria. It looks like Furmint, the white Hungarian grape variety which apparently originated in Croatia. Altesse is still grown in the more boutique-scale Seyssel appellation where it combines with Molette to lend wines lots of finesse”, he adds. Along both banks of the Rhone, between Haute-Savoie and Ain, the Seyssel appellation produces still white wines from Altesse and sparkling wines blended from Altesse and Molette. “Jacquère is ubiquitous across Savoy. It is part of the varietal range for the Vin de Savoie and Bugey appellations and its local growths, Abymes, Apremont and Chignin”.

The difference between the two grape varieties lies in their flavour profile. “Jacquère instils a lot of minerality and acidity in the wines, which are fairly tense. The reputation of our white wines has been tarnished by their association with fatty Savoy cheeses. They were long considered only good enough for drinking with fondues, tartiflettes and raclettes in ski resorts. But times have changed”, stresses Berkules.

The advantage of both grape varieties is that they do not come with high alcohol levels, even with climate change. Jacquère has an ABV of 11.5% whereas Altesse is never higher than 13%. “Altesse is a more floral grape variety which can be likened to Chenin with a candied edge. It produces age-worthy wines that pair with food”. 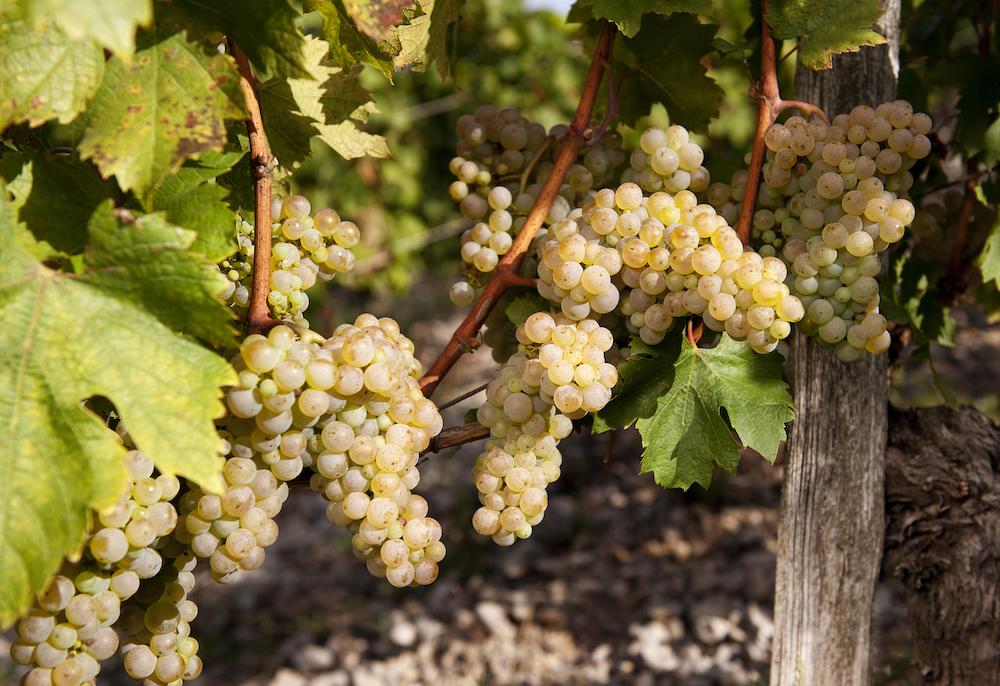 As remarkable as it may seem, Jean-Claude Masson’s estate is probably the only one that specialises in mature vintages of Jacquère. This internationally renowned winery is a source of mature vintages of Apremont, dating back to the 1980s and 1990s, or even the seventies. A highly specialised winegrower, he sells his wines to the hospitality industry, including top Michelin-starred restaurants, and to a select audience of private clients. Boasting no fewer than a dozen labels of Apremont, all fermented separately, Masson experiments with Jacquère in every conceivable way through small-batch, single-vineyard fermentations. What immediately takes professionals by surprise is that usually Altesse lends itself more to cellaring than Jacquère.

Another estate puts the same energy into Altesse this time – Domaine Dupasquier, which meticulously produces wines for laying down and stores mature vintages. Located at the foot of Marestel hill, the estate has been home to five generations of the Dupasquier family who completely forego the use of synthetic products. David and Véronique Dupasquier are advocates of lengthy ageing in large-format barrels or ‘foudres’. Aside from these two wineries, which are an exception to the rule in Savoy, most winegrowers mainly produce wines that drink well within the first 5 to 6 years for Altesse and 2 to 3 years for Jacquère. 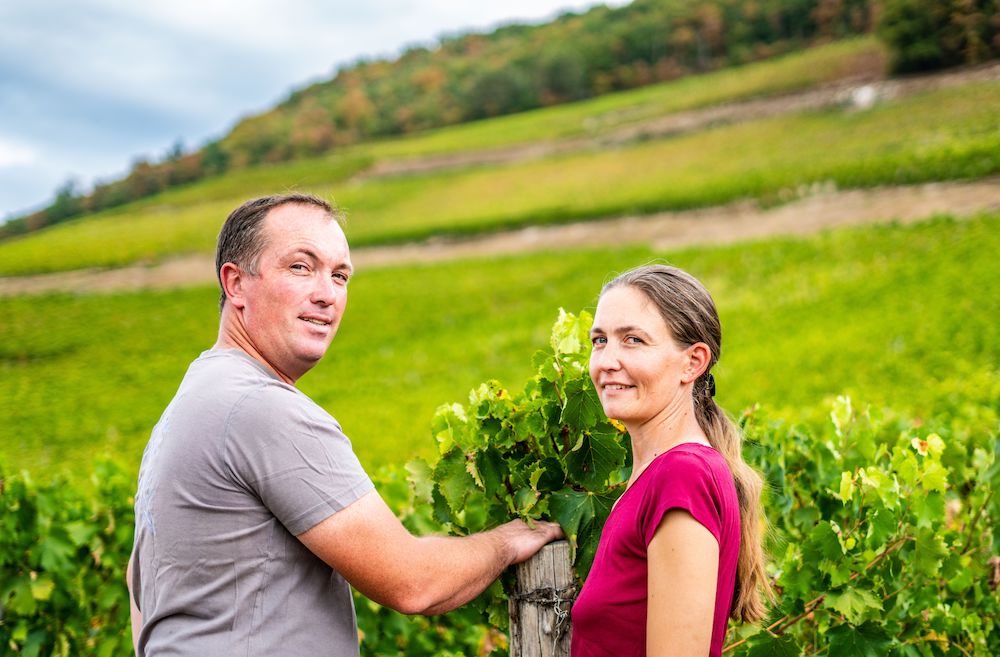 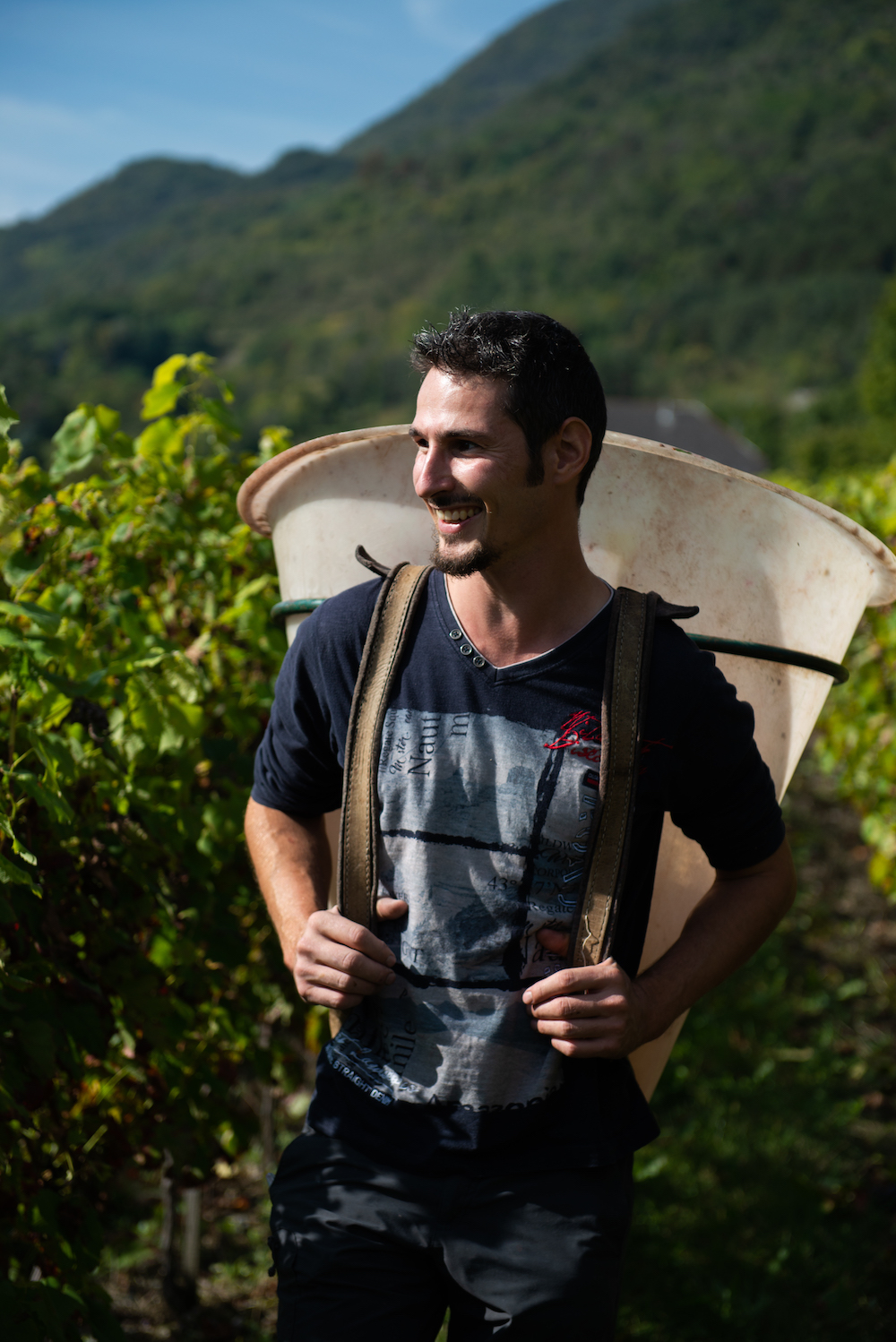 A land of inspiration

Just as in other French wine regions, organic and natural wines have become popular in Savoy too, with young winegrowers being the most common practitioners. “Thomas Veyron, who still works with his father, is one of a group of young winegrowers keen to push the envelope”, comments Berkules. Veyron farms 13 hectares with his parents in the Apremont appellation area, the cradle of Jacquère. Another part of the vineyard is situated near the Les Bauges mountain range in the Combe de Savoie. Domaine Adrien Veyron grows Altesse and Jacquère for the whites, and Gamay, Pinot noir and Mondeuse for the reds. “Out of this range, Mondeuse, Altesse and Jacquère are three historic grape varieties. We make Jacquère as a single varietal because production specifications allows us to do so for the Apremont appellation, and it means we can drill down into clay-limestone vineyard sites. The quality and freshness of Apremont have improved – it is no longer a ski resort staple for holidaymakers. We sell it to restaurants along the shores of the lakes and direct-to-consumer sales are constantly on the increase”, explains Thomas Veyron.

Changing consumer patterns have prompted Domaine Adrien Veyron to modernise its cellar door facilities to promote tourism. “We currently sell across France, which was unimaginable just a decade ago. Our success stems not only from the variety of Savoy grapes, but also from our range of 14 different wines”, says Veyron with obvious pride.

Veyron makes Altesse as entry-level wine but he also ferments it in oval tanks, a format inspired by ancient Roman ‘dolias’. “The Plénitude label was produced as an experiment – it is a real trailblazer. This style of maturation gives the wine breadth. The wine is marketed under the Roussette de Savoie appellation. The real advantage of this type of maturation is micro-oxygenation, and we aim to develop this unique style of wine. In the future, we will also be developing oak maturation because up until now we did not mature our wines”, he explains. 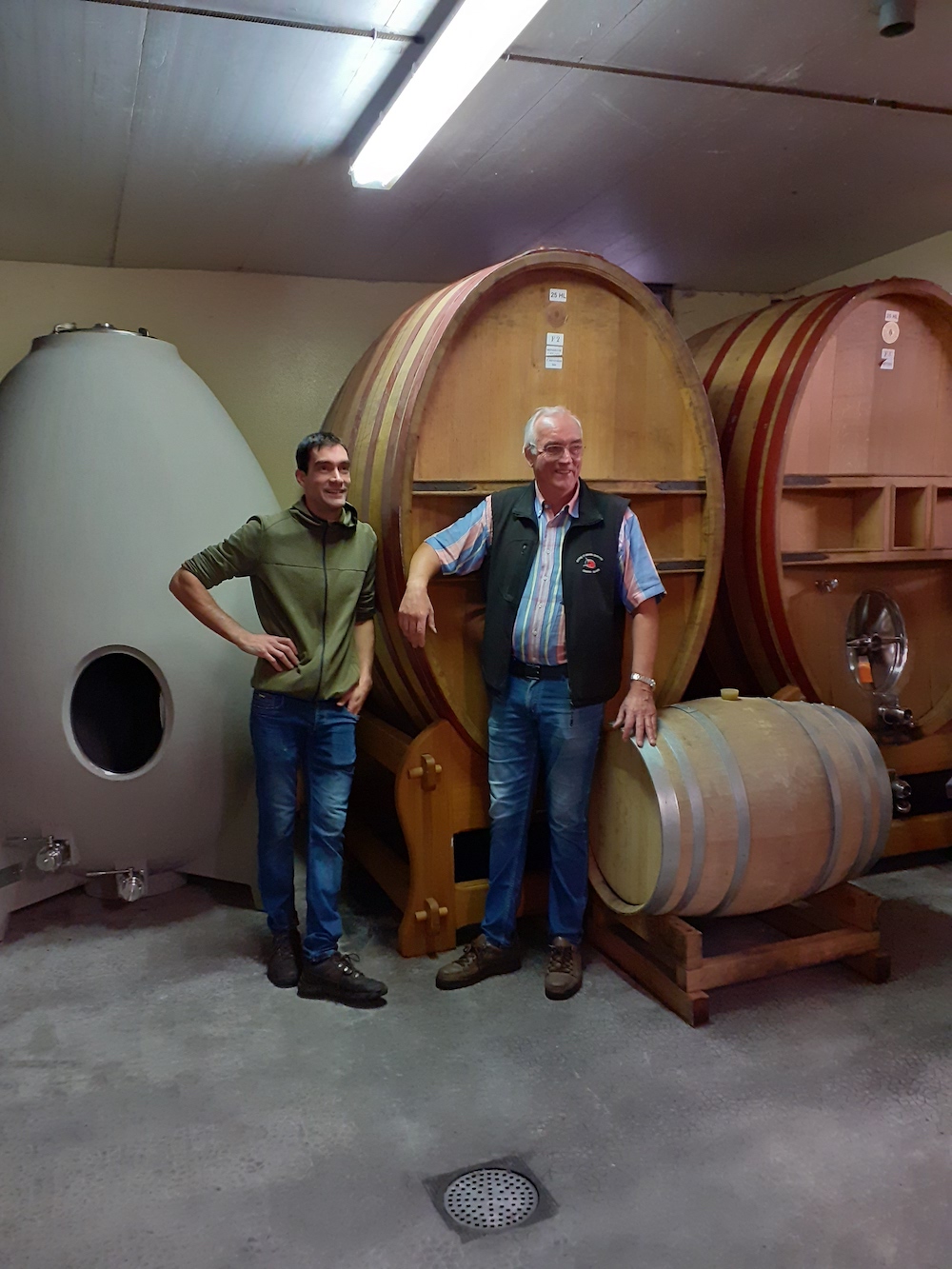 André and Michel Quenard’s estate is a 27-hectare, family-run property established in the 1970s, but where the tradition of vine growing has been passed down through the generations since the 17th century. “My great-grandfather grew various crops until my grandfather specialised in vine growing in the 1950s. At the time, it was a real gamble because a litre of milk was the same price as a litre of wine, but he was passionate about winegrowing”, recounts Guillaume Quenard, who established his boutique estate in 2020 with 2.5 hectares of vines planted on Toméry hill. “People thought my grandfather was mad to plant vines on such steep inclines in the most southerly part of Chignin. But grandfather André dug his heels in and planted Altesse”, he adds. The Quenards, both father and son, own hillside vineyards on Toméry hill, in the foothills of the Les Bauges mountain range on very stony scree soils. “My grandfather replanted vines on these hills, which then became my father Michel’s main focus. He is the only one who believed in the Bergeron grape variety (Roussanne) on a hillside set aside for Jacquère. Despite this, Jacquère wines are also produced as Chignin-Vieilles Vignes Coteaux de Tomery, alongside Chignin-Bergeron”, he adds. Nowadays, the father and son duo grow Bergeron and Jacquère in equal shares. “Both Bergeron and Jacquère are grape varieties that are well-suited to the region and we produce around fifteen different labels. We farm entirely by hand but have all the mod-cons in our winery, with temperature-controlled tanks and natural fermentations – none of which undermines the character of our wines. And we don’t use any chemicals in our vineyards”, stresses Quenard. 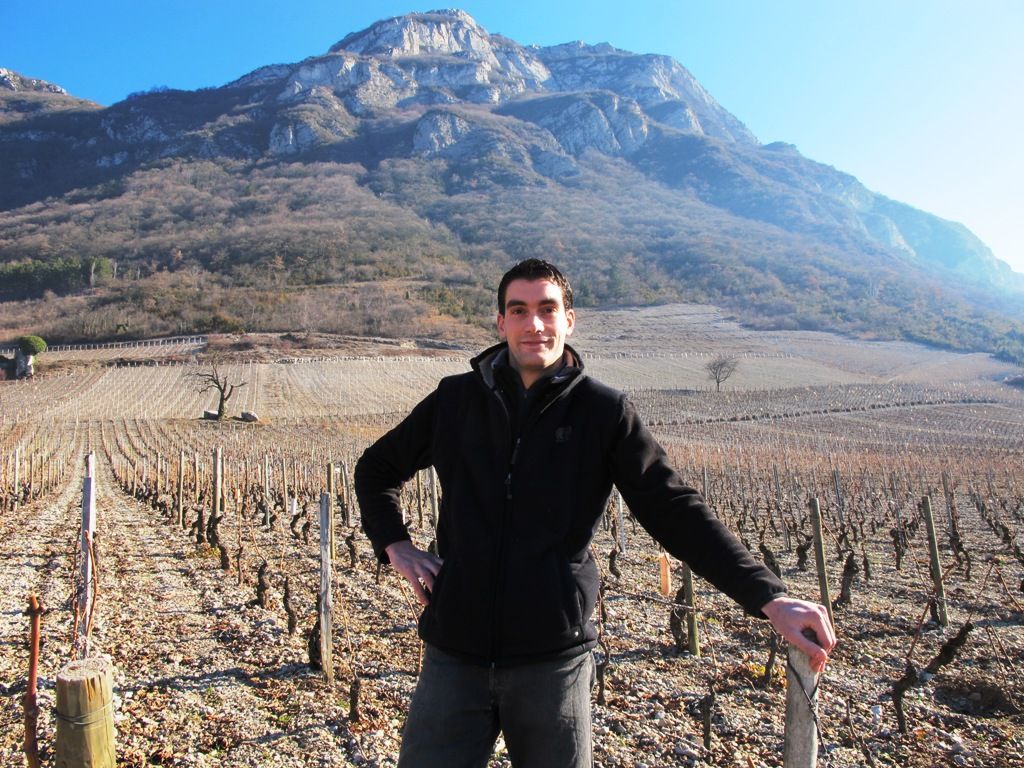 GUILLAUME QUENARD ESTABLISHED HIS BOUTIQUE WINERY IN 2020 WITH 2.5 HA OF VINES PLANTED ON TOMÉRY HILL

A lot of effort is put into maturation. Here, Jacquère is fermented in oval tanks, as orange wine or in amphorae. “Jacquère now is so successful that we don’t have enough. We would like to have more because it is a very popular white wine, particularly in North American markets, Great Britain and Northern Europe. And of the 7 hectares planted to Jacquère, one is hived off for Crémant”. Altesse covers a diminutive 0.5 hectares on the property and Guillaume Quenard would like to expand its footprint due to demand. The Roussette de Savoie appellation is a richer and riper white wine than Jacquère, though it does have a slightly higher alcohol level.

The winery devotes a number of labels to both grape varieties. Les Abîmes is a Jacquère-based wine produced to the tune of 10,000 bottles, rising to 50,000 for the Les Cristallins and Chignin Vieilles Vignes, also made from Jacquère. Roussette de Savoie Les Craies, conversely, is made from Altesse. Guillaume Quenard also uses Jacquère to make orange wine in amphorae where the maturation process produces wines driven by fruit and minerality – only 1,000 bottles are made, all of them sold directly to private clients. 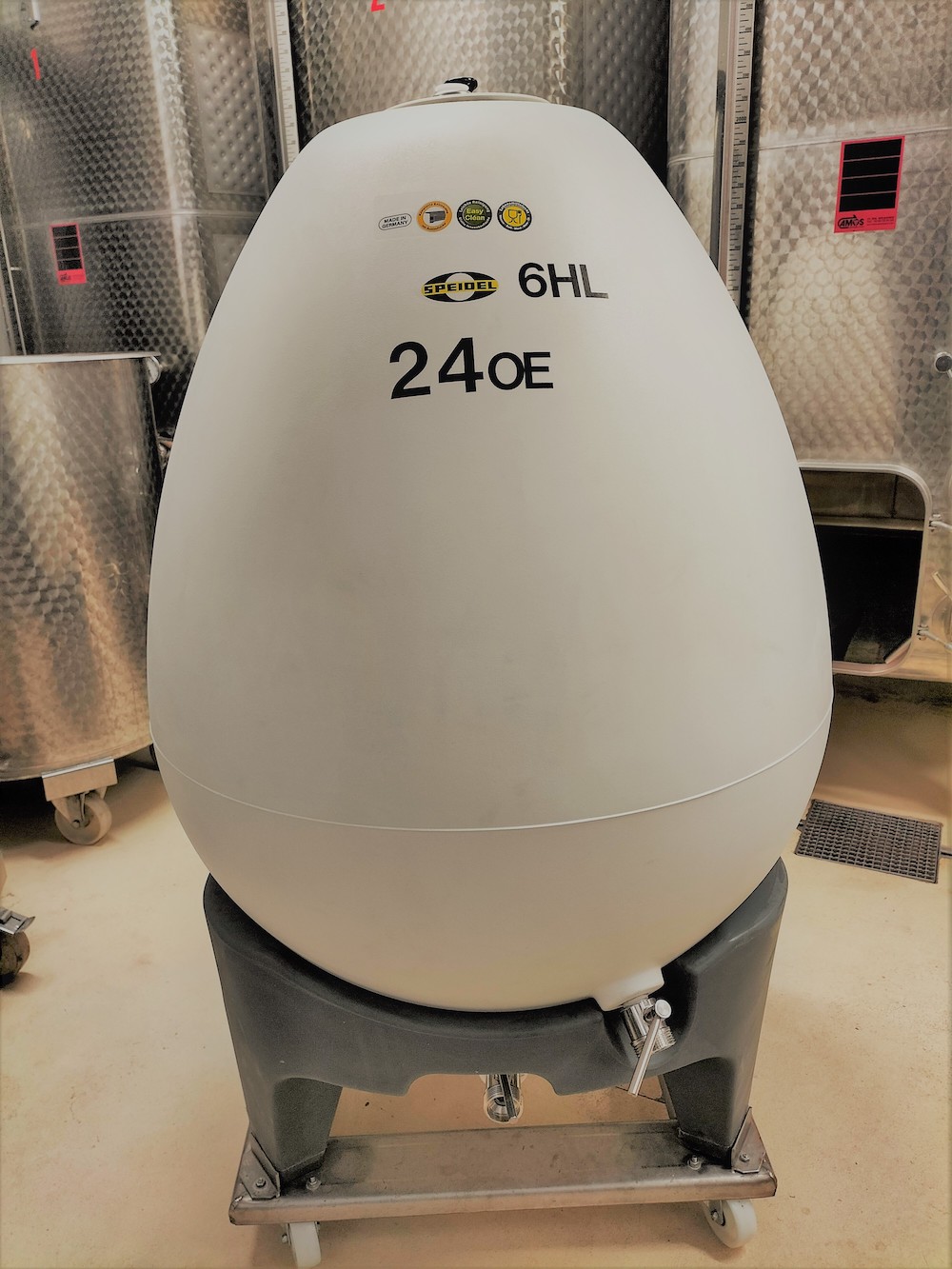 Guillaume Quenard and his father market their wines in the hospitality industry and through wine merchants, with a balance of 15% shipped to export markets. They feel that direct-to-consumer sales and tourism have bolstered recognition of Savoy wines. As for their wines, they can be found in locations such as the Les Trésoms hotel in Annecy, run by Véronique and Pascal Droux, and the gourmet restaurant Atmosphères in Le Bourget du Lac. This renowned Alpine venue in the Les Bauges mountains has a wine list that celebrates many of the wines Savoy has to offer. 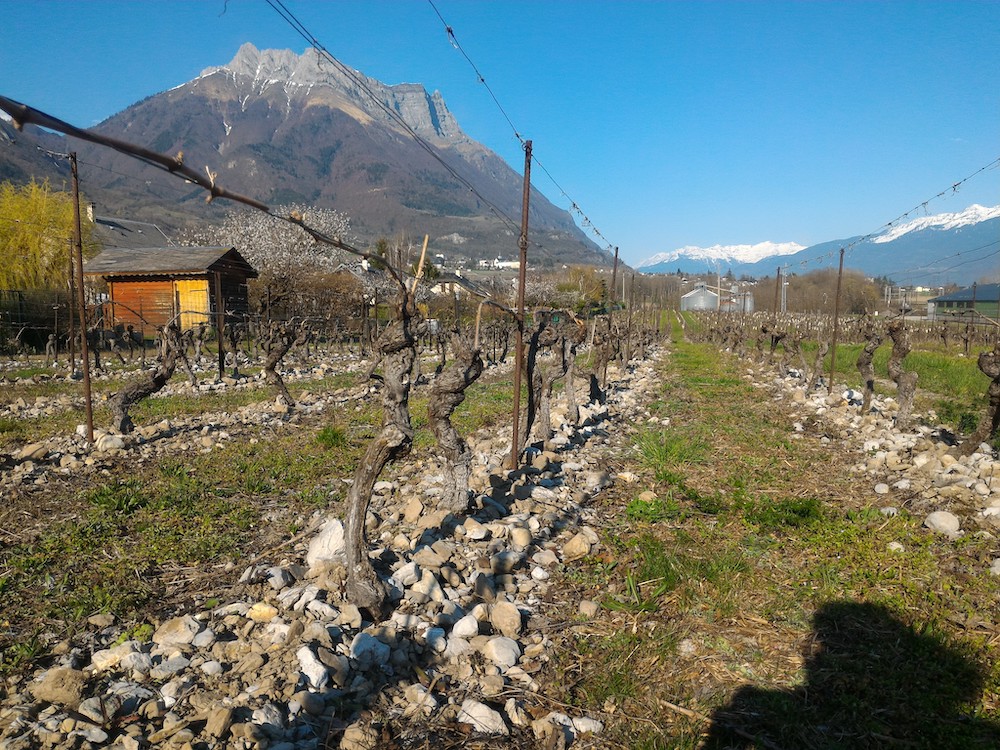 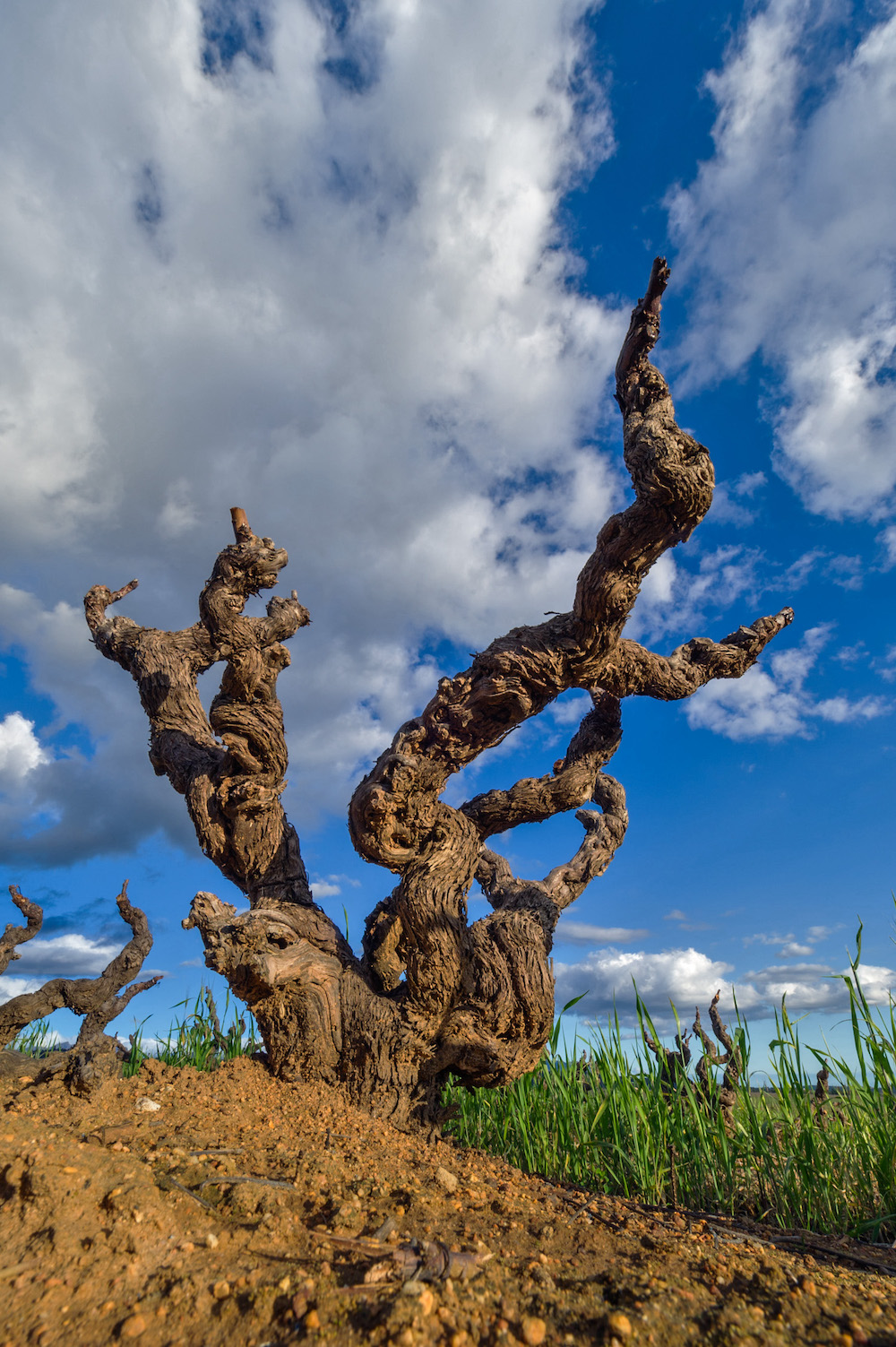 Soil-searching for fine Pinotage
Like all inspiring wine countries globally, indigenous grape varieties are part of a quintessential blend of things to see, taste and experience. For South Africans, Table Mountain is their beacon of ancient soils, its "tablecloth" of cloud the introduction to the Cape's whimsical weather. And while the smell of Boerewors and Karoo lamb chops on a traditional open fire "braai" sets the scene for local fare, it is not fulfilled until Pinotage anoints the occasion. 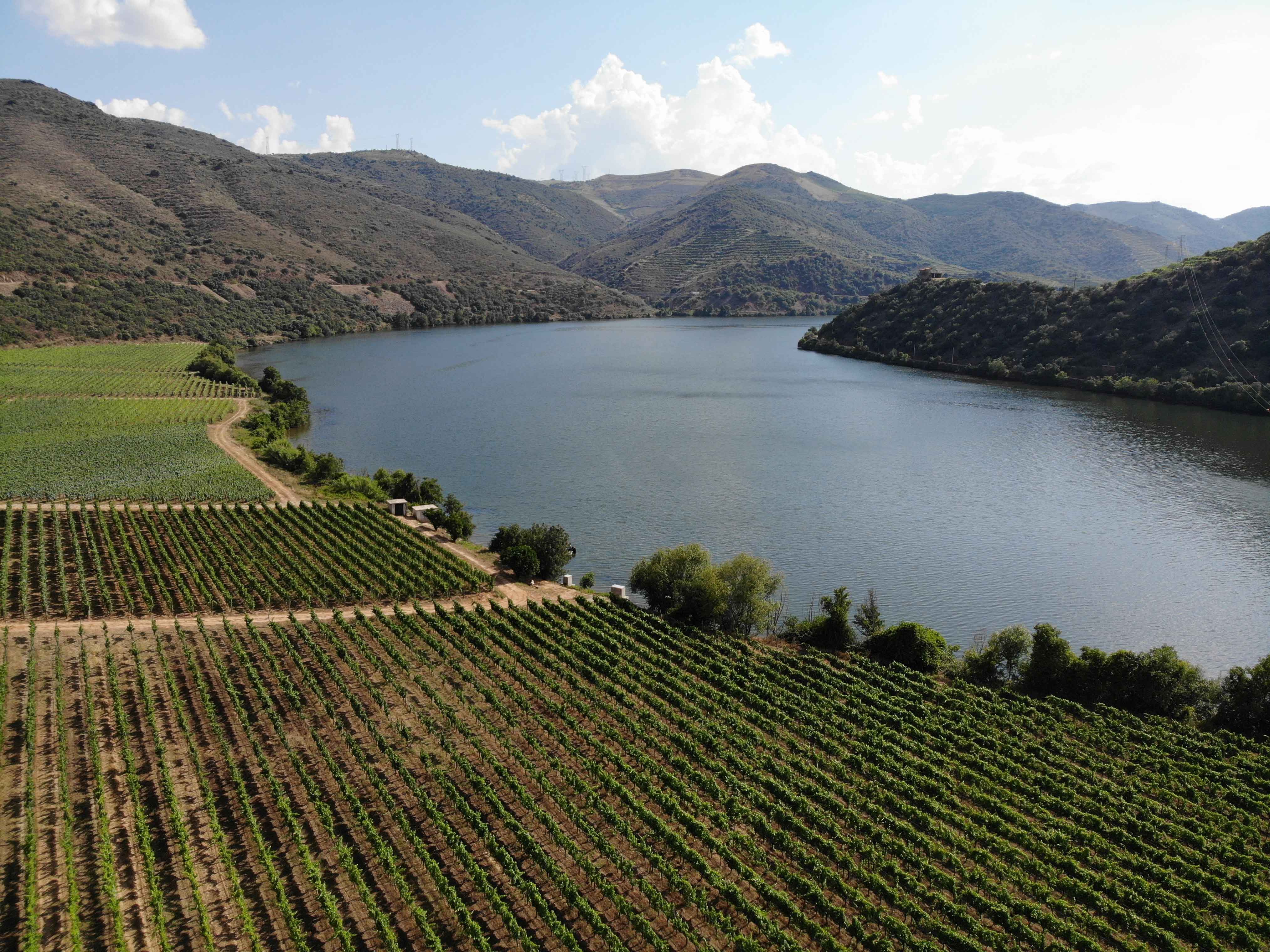 Oporto and Douro: The perfect combination for making great wines
Port wine is one of Portugal’s oldest global ambassadors. There are few places in the world where wine has had such a remarkable influence as in the Douro. Consumer tastes have shifted though, from sweet to drier offerings. Santiago Jimenez goes on a journey along the region’s iconic river, seeking out, not its storied fortified wines, but the more recent addition to its present-day portfolio – still wines. 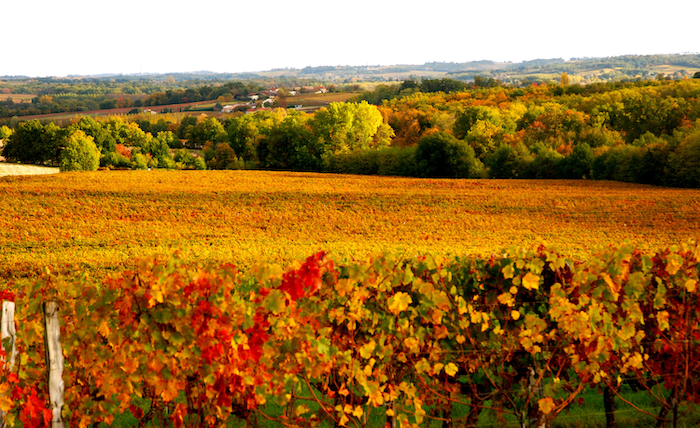 Are Bordeaux Cabernets under threat?
In around 2050, the Bordeaux wine region is likely to experience weather patterns similar to today’s climate in central Spain. Merlot is already in the hot spot, which obviously begs the question – will global warming affect other varieties such as the Cabernets (Franc and Sauvignon)? Their growing cycle at least could undergo profound changes, leading to transformations in style and structure. Gilbert & Gaillard travelled to the vineyards to find out more.