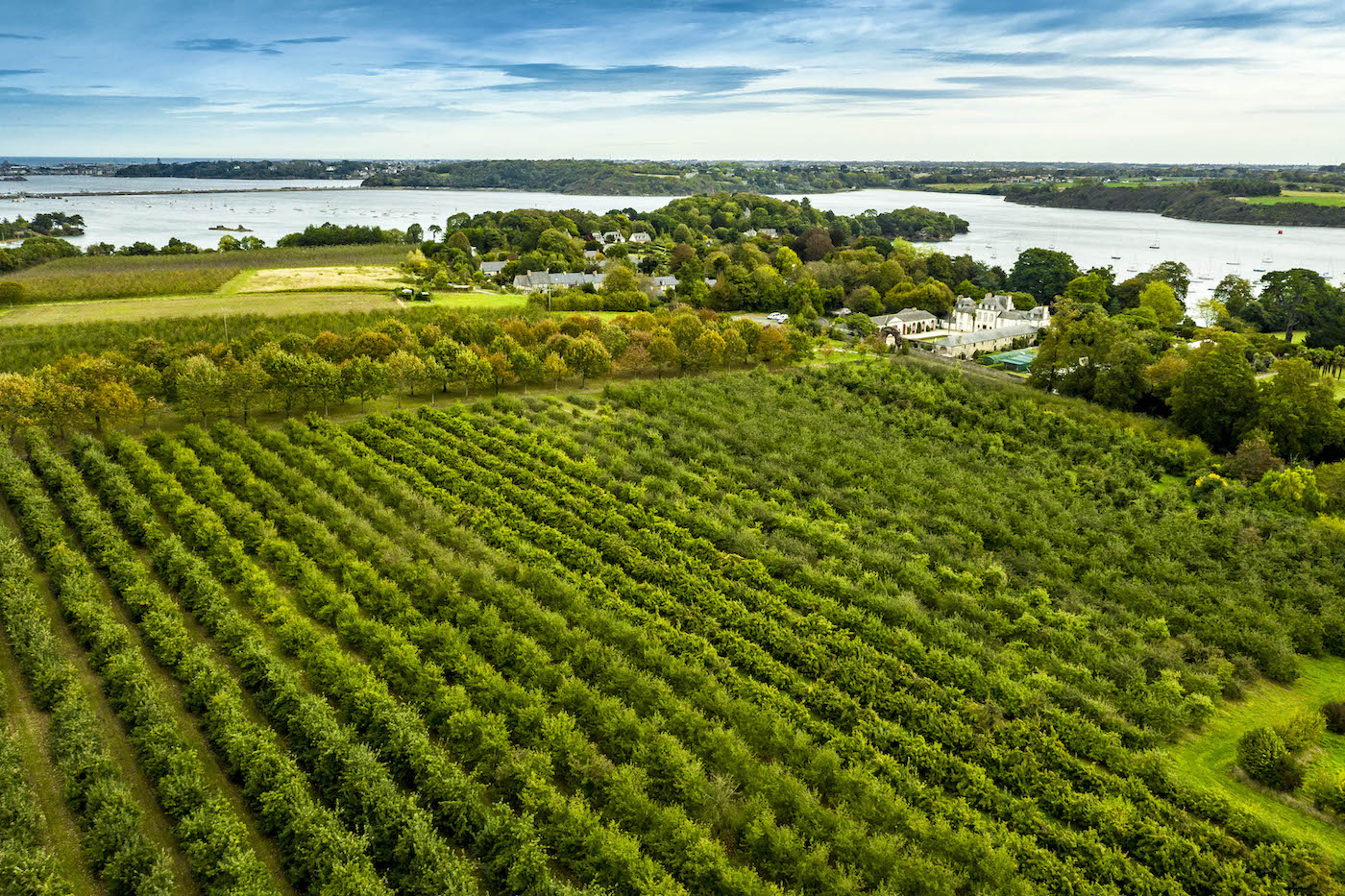 Cider: a whole host of choices waiting to be discovered

Ciders are the perfect match for current drinking trends. Great for socialising, relatively low in alcohol, inexpensive and less mired in the pomp and circumstance that accompany wine tasting, they attract a wider clientele. Nine prominent French cider firms explain why.

In the west of France, the orchards of Normandy and Brittany are part and parcel of the landscape. This year’s apple harvest started quite late – at the beginning of October – and volumes are lower than in previous years due to a dull summer and adverse weather conditions. This is bad news for an industry providing 15,000 jobs and boasting 600 cider works, which has already had to cope with the pandemic and a drop in stocks. Cider is rooted in French tradition and has many assets. Produced by fermenting apple juice, its flavours and low alcohol content, ranging from 2 to 8% ABV, are a magnet for consumers. In France, apple orchards account for a quarter of all fruit orchards, equating to 35,000 hectares, 9,000 of which are planted to specific varieties for producing cider. At less than 2 litres per year per capita, French cider consumption is significantly lower than for wine or beer. This can be ascribed to its highly seasonal nature – sales peak at the beginning of the year and in the summer, and outside Brittany and Normandy consumption is relatively low. The marketing board and several brands have grasped the nettle by rolling out PR campaigns to promote cider and broaden the consumer base. We met the main players in a market that is decidedly bubbly! 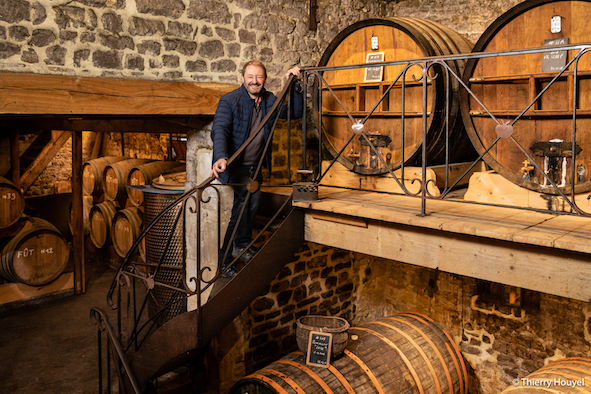 Near the D-Day landing beaches and the American cemetery at Colleville-sur-Mer, the orchards belonging to Philippe and Michel Legallois invite visitors to discover the Ferme de la Sapinière. The two ‘flavour artisans’ have been producing Pommeau de Normandie, Calvados, apple juice and of course cider since 1991. “Our organically-farmed orchards are home to 35 different varieties of cider apples”, says Michel Legallois. “The ciders are vintage-labelled and produced by natural fermentation in the bottle with no added carbon dioxide”. Here, customer relations are prioritised. Cellar door sales account for 70% of the total and exports 4%, mainly to Germany, Belgium and Mexico. Apple Oak is a naturally fermented cider. It matures for the first 5 months in tanks, then it ferments in relatively new Cognac barrels. The resultant cider shows distinctive balance between fine tannins and acidity, delicate effervescence and a long finish driven by notes of mature spirits. 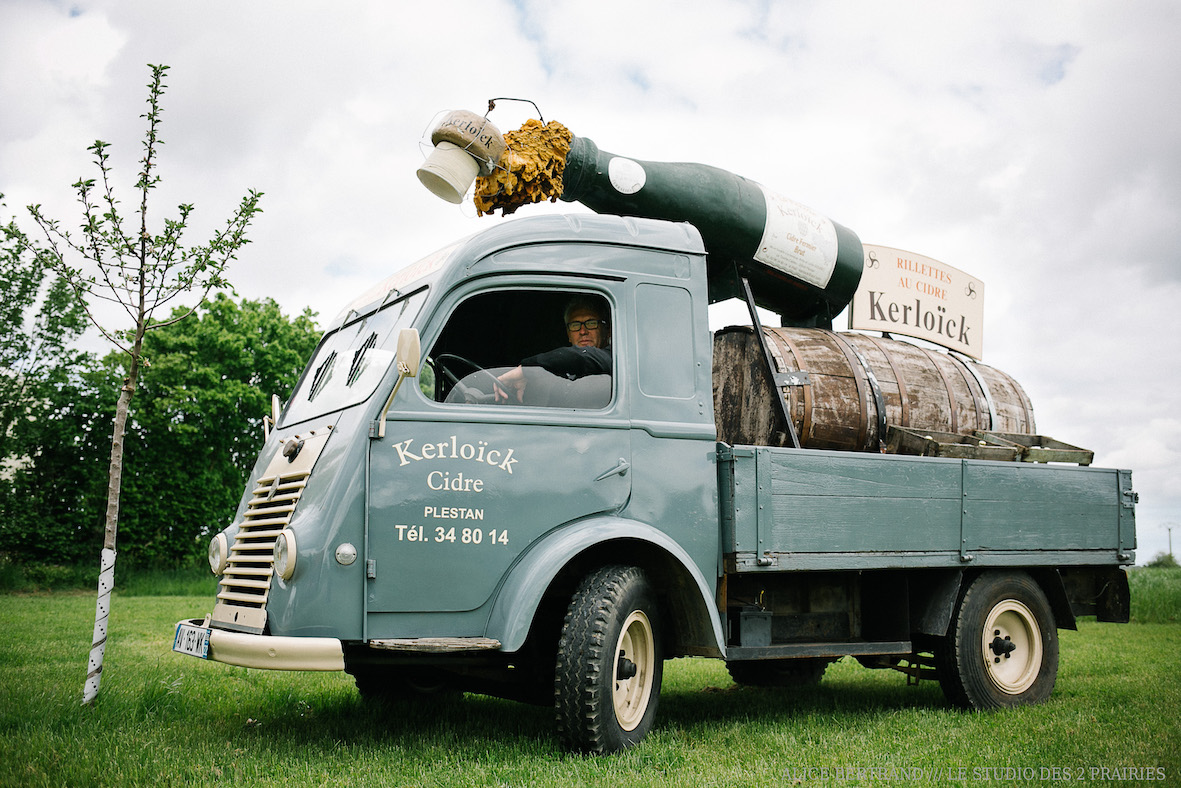 Loïck Gouret, company co-founder, in the schooner ‘Kerloïck’, its mascot.

Loïc Gouret and his wife Anita established their business in 1999 before being joined by their son Jean-Marie in 2016. This Breton cider works farms 40 hectares of organic orchards. About fifteen varieties of apple trees are used to produce structured dry ciders showing intense aromas, as well as medium-dry and sweet ciders which display distinctive lightness and fruity flavours on the palate. “As an orchard owner and producer, we can control every stage of production”, stresses Jean-Marie Gouret. “All our farmhouse products, ciders, juices and spirits are made on our farm”. Exports account for 10% of volumes and are tending to grow due to the care taken across the different ranges. 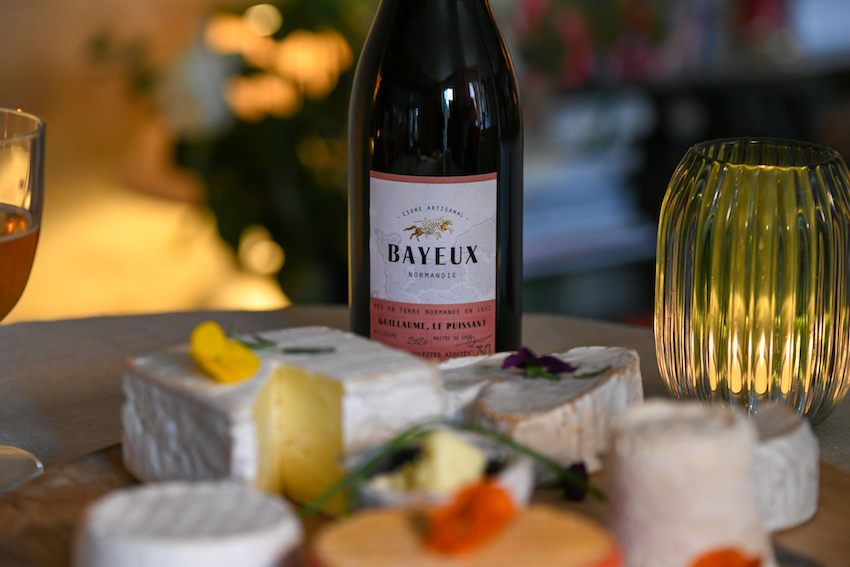 Three kilometres from Bayeux with its medieval centre, Notre-Dame cathedral and famous namesake tapestry, the Viard cider works is one of the oldest family-run businesses in Normandy. Established in 1932, it houses a superb 18th century farmhouse. In this enchanting setting, the company honours its native Normandy with full-flavoured ciders. “Our ciders are made from apples harvested less than 60 kilometres from the farm”, explains sales manager Vanessa Sagot. “We select the most aromatic varieties and only press apples of excellent quality. The Guillaume, Odon and Edouard labels are defined by controlled fermentation using exogenous yeast customarily used for wine, which develops specific aroma and flavour characteristics. These are exceptional ciders, which we rated 93, 92 and 90/100 respectively. 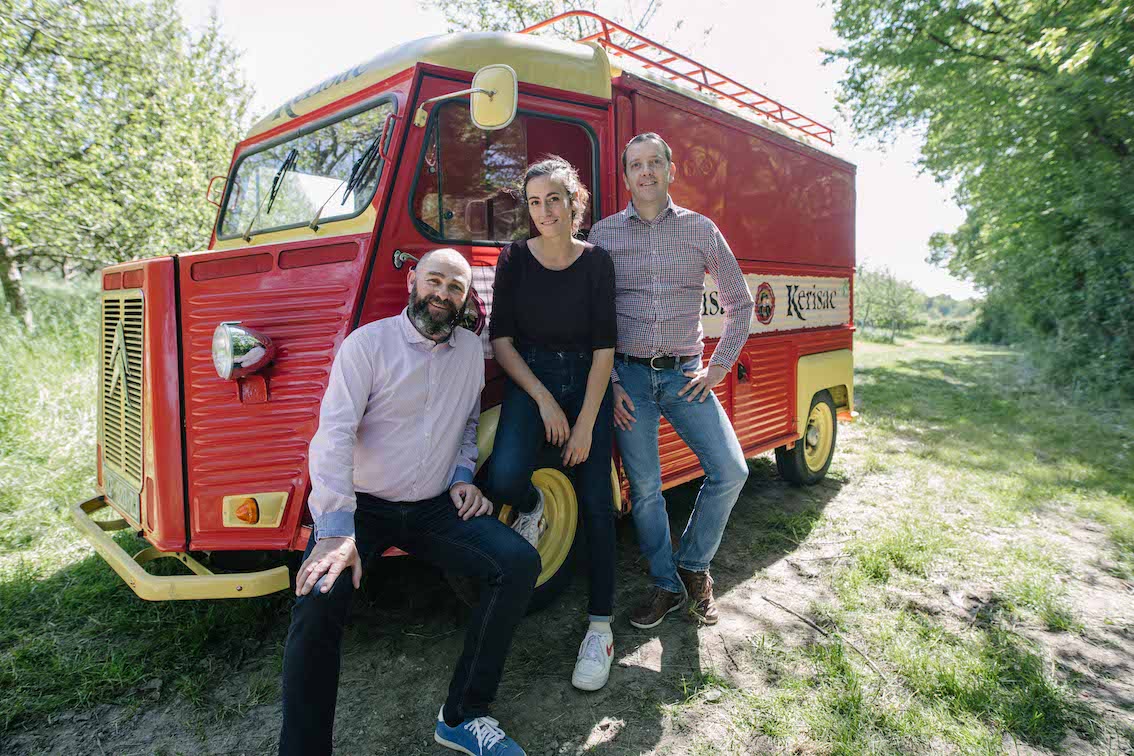 a lorry that travels the length and breadth of Brittany offering tastings of Kerisac cider.

In the Guillet family, expertise and tradition are passed down through the generations. In 1920, Jean-Edmond Guillet founded a company focused on producing cider – his ambition was to spread traditional Breton know-how outside his regional boundaries. A century later, Laurent Guillet, his great-grandson, is the sales director of a company with a staff of 40 which has a made a pledge to protecting the soils and orchards. “Our ciders show hallmark fine bubbles, freshness and tannins”, he explains. “Our blends are produced from typically Breton apples”. Cellar master Marion Dubarry makes fresh, complex ciders. The dry, sweet and traditional dry Cuvée spéciale stems from a unique production process with lengthy maturation in tanks that harks back to the roots of traditional cider making. 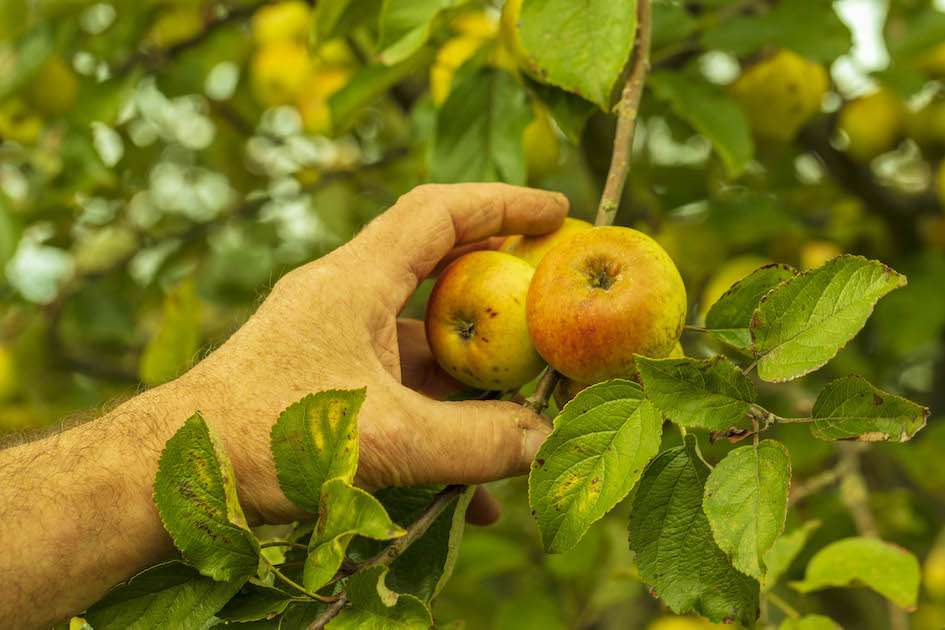 A variety of apples at Val de Rance.

This cider co-operative is one of the key industry players. In 1953, 12 apple producers from the Val de Rance area combined their production and marketing resources driven by a passion for excellence. On 5 hectares of land along the banks of the Rance, Les Celliers Associés boasts 355 member producers and 115 employees. This environmentally-friendly cider cooperative is France’s first to be certified High Environmental Value. Its generous, well-structured Val de Rance ciders feature on the menus of many restaurants and across 50 countries. There is a valid explanation for its export success: “Our ciders are defined by their typical flavours”, comments export sales manager Philippe Coignat. “Each market has its own preferences and the work of our cellar master Alain Le Page allows us to closely align with our customers' expectations. For example, our dry ciders show a hint of tannin entwined with a touch of sourness and a refreshing aftertaste, due to a blend of sweet, bitter-sweet and bitter apples that have very little acidity. The resultant aromas are ripe fruit with hints of herbs and spices”. 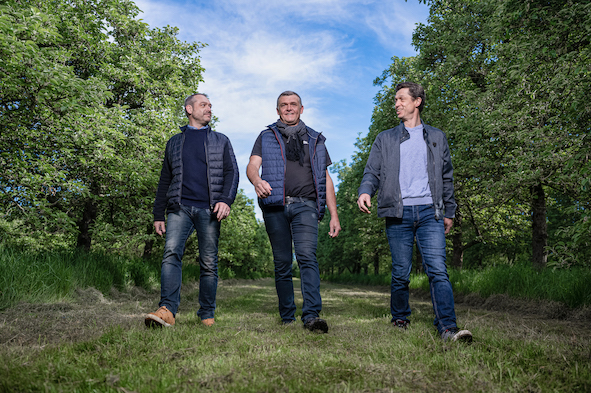 Guillaume, Matthieu and Joseph Jan, the three brothers at the helm of Celliers de l’Odet in their orchard.

Three brothers, Guillaume, Joseph and Mathieu Jan, united by a brotherly bond and unrelenting quest for excellence, run Les Celliers de l'Odet. Set on a 13th century estate, Château Lézergué overlooks a superb 35-hectare orchard established by their father in 1990. Their ciders’ perfectly balanced sweet and sour flavours regularly win them awards. “They show trademark length on the palate”, stresses Guillaume Jan. “The powerful polyphenols in our apples make them rich and powerful. Depending on our choice of blends, varieties and fermentation temperatures, the cider can be dry, mineral, full-bodied and fleshy or sweet, mellow and spicy”. Although dry cider is the most popular in France, extra-dry is very successful in the United States and sweet cider in Japan.

Cidrerie de la Brique: at the core of Norman cider 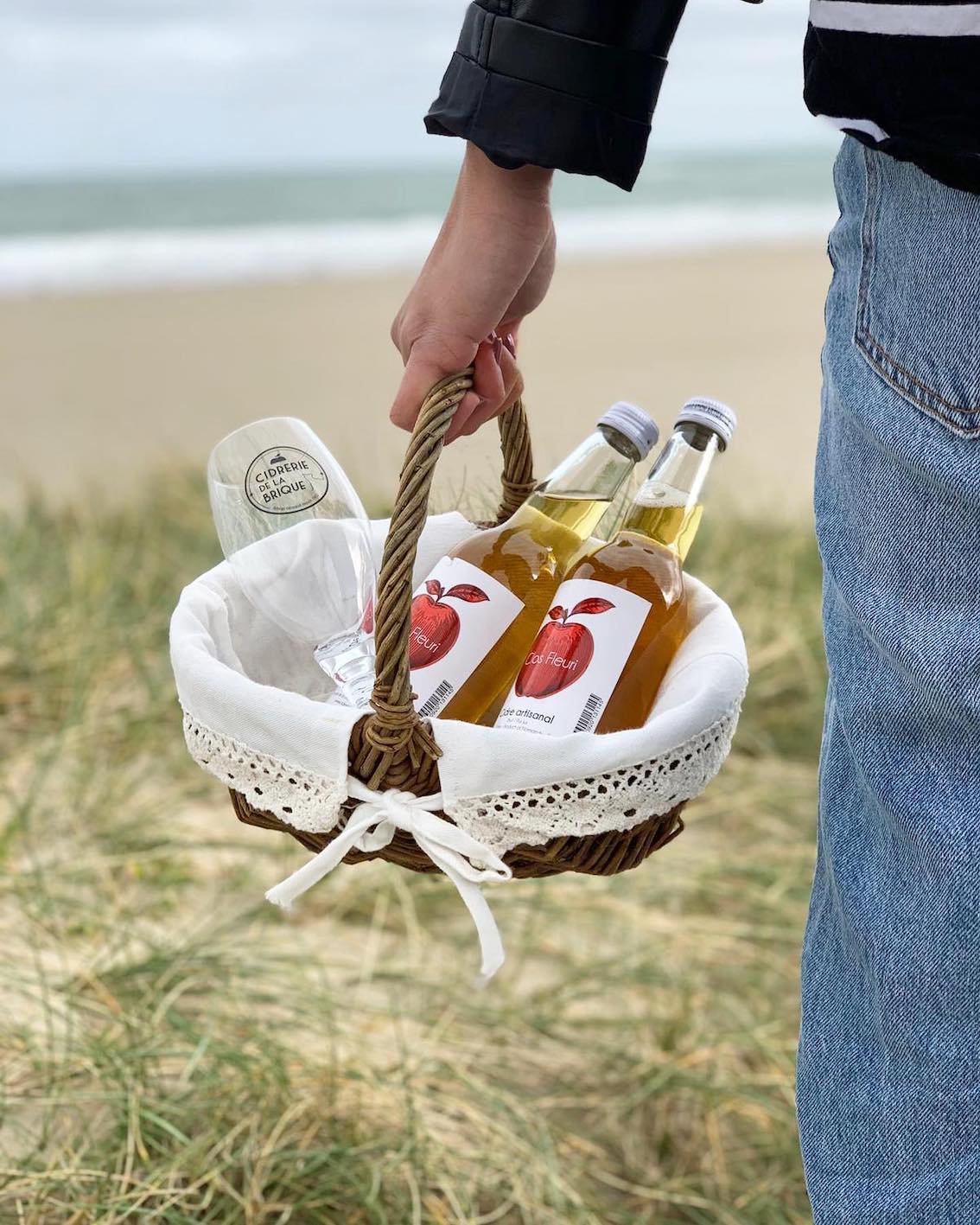 A walk through the walled enclosure covered in flowers

Since 1953, promoting Norman cider has been part of the genetic make-up of Cidrerie de la Brique. Exports represent 20% of revenue with the ciders shipped to over 20 countries. “Our goal is to promote Norman cider internationally”, says chairman Jean-François Calandot. “We work with 500 local apple producers. Dry cider accounts for 75% of sales versus 25% for sweet cider. Admittedly, the market has been declining for several years, but rejuvenation in the restaurant industry with a new, young clientele, new formats and more modern marketing all deserve praise. Our products are natural and local and have all the requisite qualities to perform well. They have low alcohol content, a low calorie count and low sulphite content”. 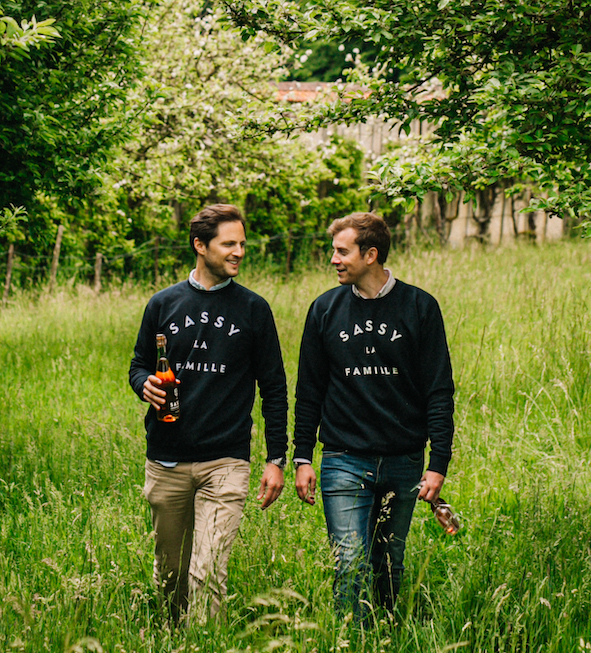 Pierre-Emmanuel Racine-Jourdren, co-founder of the Sassy brand of cider with his business partner Xavier d’Audiffret Pasquier.

Founded by Pierre-Emmanuel Racine-Jourdren and Xavier d'Audiffret-Pasquier, Maison Sassy has been displaying outstanding growth in the cider market. Launched in November 2014, the Normandy-based start-up has witnessed incremental growth in revenue each year and now markets several million bottles, half of them exported. They can be found in gourmet restaurants and cocktail bars. “France and the UK are our two major markets”, explains Racine-Jourdren. “But we also ship to Australia, South Korea, Japan and Canada. We chose to design a modern product geared to present-day drinking habits and to break with conventions by creating a balanced cider that is more complex than a classic industrial cider”. 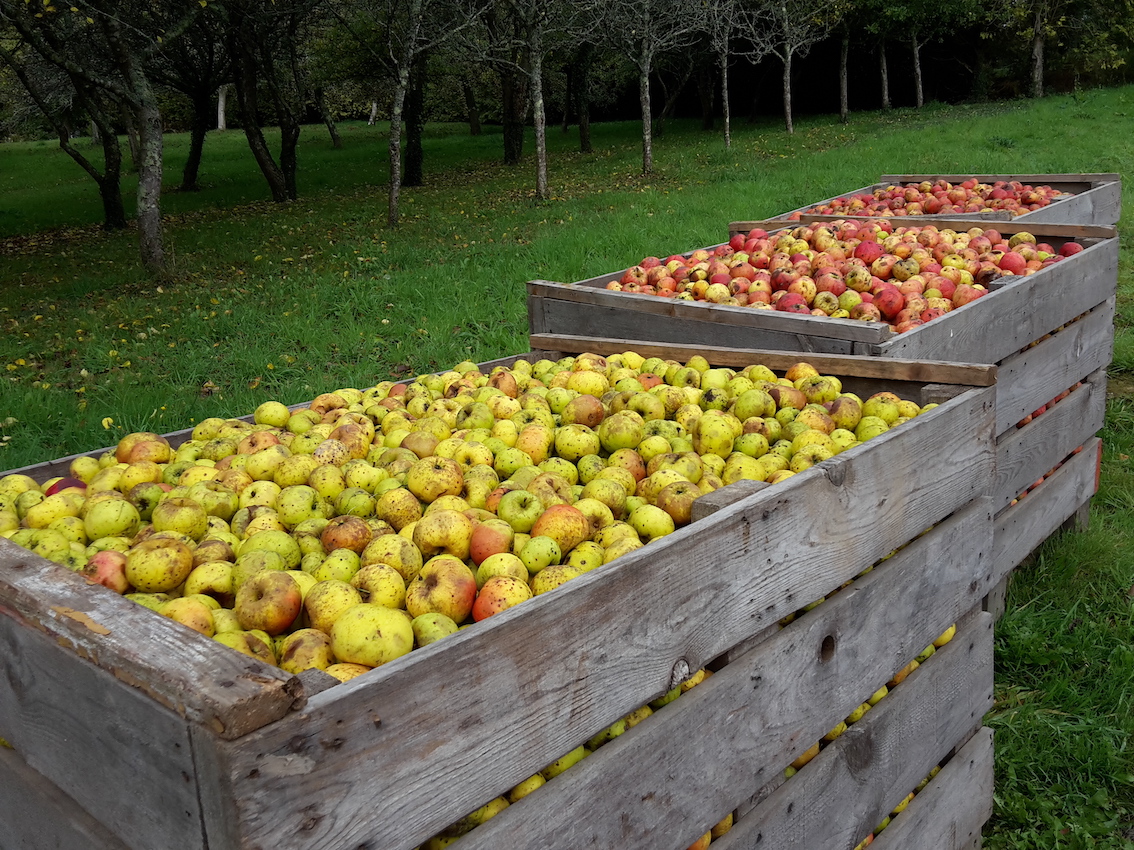 Apples are stored in wooden boxes to preserve the quality of the fruit.

Jean Le Brun established this cider works in 1955 near the Atlantic Ocean. It was taken over in 1991 by his youngest son Dominique. Often showered with accolades in France and abroad, the company has grown to become France’s leading independent cider works and its third by production. “Our ciders are 100% pure juice and we don't use any concentrates”, explains sales manager Maxime Segard. “The bubbles form naturally during the fermentation process in the tank. Our ciders are not pasteurised so that we can better preserve aromas and flavours. The specific nature of the region's apple varieties allows us to use the traditional process of clarifying apple must by gelling the pectin”. This renowned technique maximises the aroma and flavour quality of the ciders, and enjoyment for consumers.

A great fit for the zeitgeist

Obviously, the pandemic and closure of restaurants, a growth area for cider manufacturers, led them to fear the worst. Initially, volumes lost in the hospitality industry were not counterbalanced by super and hypermarkets, but they have since recovered. In fact, cider is proving to be extremely popular with a new category of relatively young (from 25 to 45 years old) urban enthusiasts and imbibers. Although consumers in France are still very much drawn to wine, the trend seems to be less entrenched abroad. “The market is faring pretty well”, claims one producer. “If post-pandemic consumers have a yearning to revert to simple, natural values, cider is the perfect fit for these precepts”. Cider is most often made without any added ingredients, just fermented apples, and has low alcohol content and calories. It is a great drink for sharing and also pairs extremely well with local dishes from Normandy or Brittany. Offering laid-back enjoyment, it also works with different types of cuisine from around the world. Both in France and internationally, these are all major plus points. 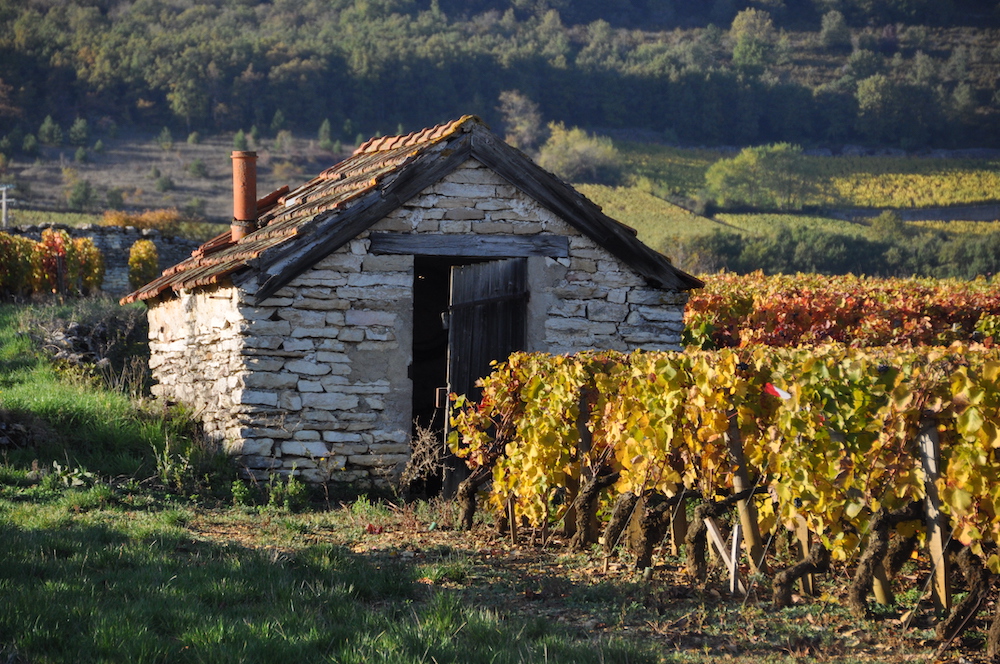 From HVE to Organic, Burgundy makes the pledge to the environment
When a legendary wine region makes a firm commitment to the environment, its status is enhanced even further. In Burgundy, the number of wineries certified High Environmental Value has doubled since 2020, a trend which mirrors the region’s long-standing quality-driven focus. Gilbert & Gaillard went to the heart of the region to find out more about the phenomenon. 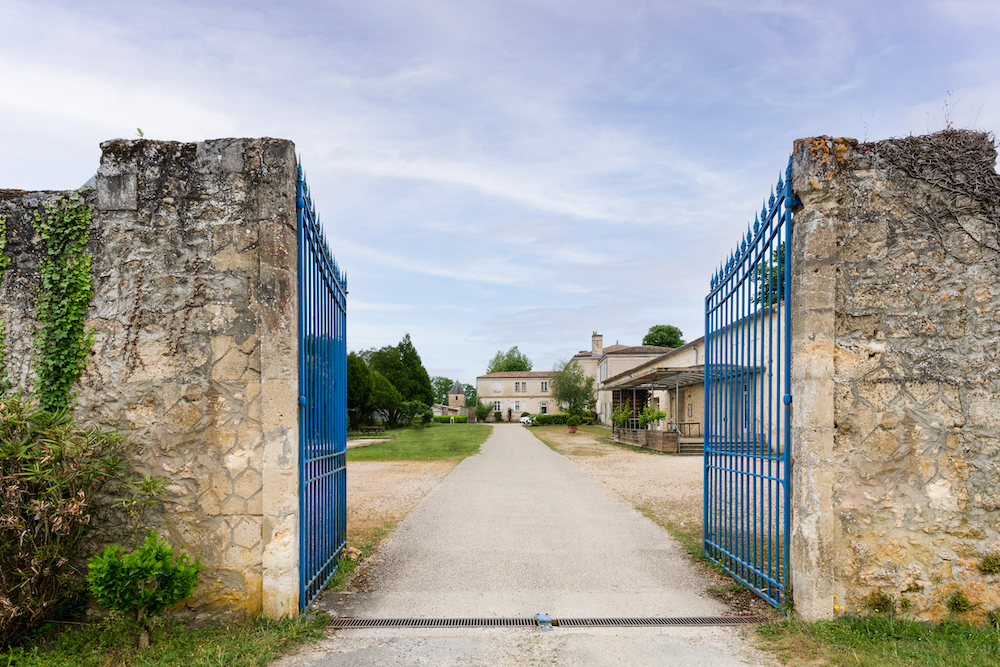 Be prepared to fall in love with Crus Bourgeois wines
Are you really familiar with Bordeaux wines sporting the intriguing ‘Cru Bourgeois’ moniker on their labels? In an era of constant one-upmanship and an ocean of endorsements and superlatives, is this just one more marketing gimmick to catch the consumer’s eye, or is it genuinely meaningful? We went through the required specifications with a fine-tooth comb and quizzed the chairman of the Alliance along with various member chateaux. And here is our verdict! 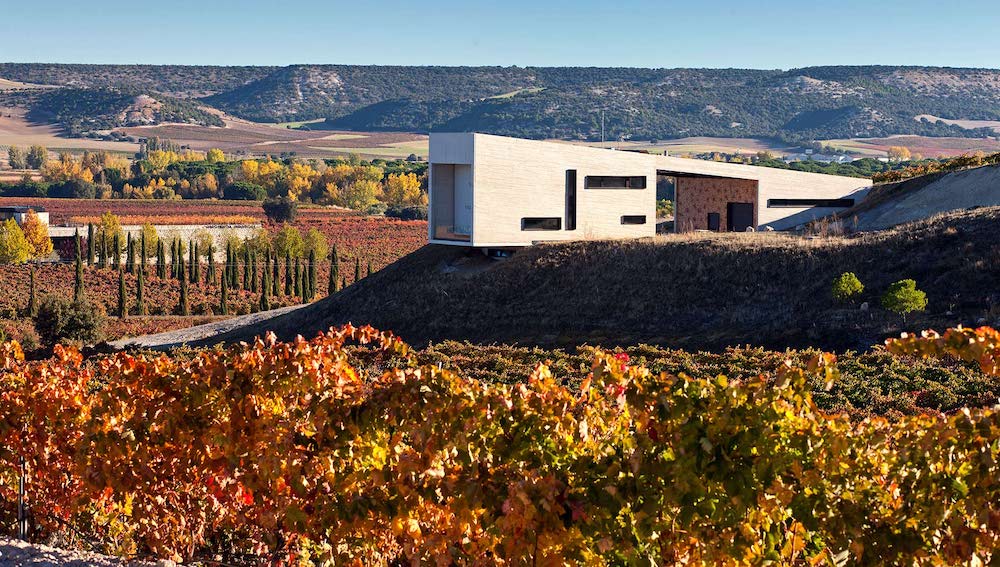 Castilla y León – old vines, terroir and heritage
The Castilla y Leon region, in North-West Spain, is replete with famous appellations such as Ribera del Duero, Toro, Cigales and Rueda – lining the banks of the river Duero and producing some of the country’s finest wines.