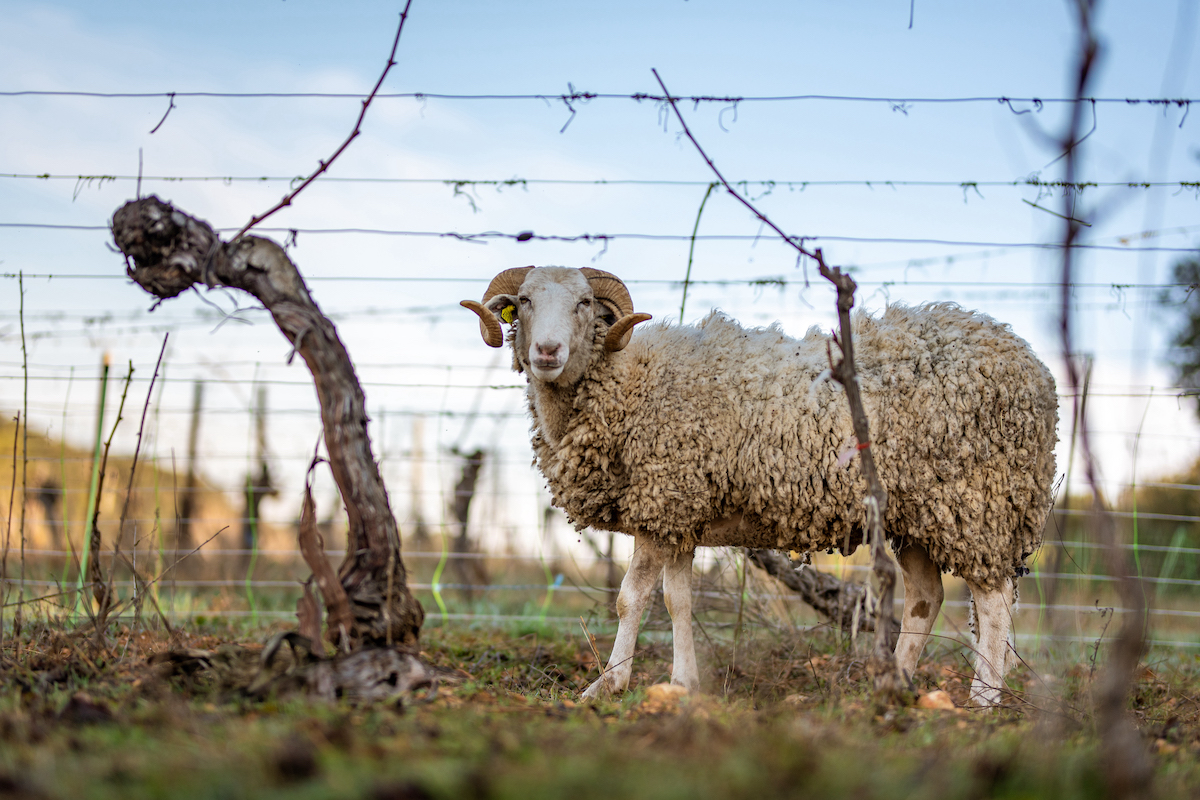 By Christelle Zamora, posted on 03 February 2022

Preserving biodiversity, saving water resources, prioritising agro-forestry, choosing un-cloned vines and resistant varieties are all avenues being explored for countering weather hazards and safeguarding the environment. Winegrowers in Languedoc are experimenting with them all.

“Languedoc-Roussillon is rightly considered to be the largest wine region in the world, not just for its vineyard acreage, but also for its range of grape varieties and styles of wine. No other region has such a sustainable dynamic. The issue is knowing how long it will last”, questions Alain Deloire, lecturer, researcher and an expert on vine biology at Montpellier SupAgro.

Languedoc wine growers are faced with the challenge of adverse weather – the 2016, 2017, 2018 and 2019 vintages all offer examples. Covid aside, the 2020 vintage was normal from a weather perspective, but on April 8, 2021, the Twitter account of Languedoc’s iconic Mas de Daumas Gassac winery posted this message: “The Gassac valley has been combatting frost for two days and despite all the measures taken, temperatures dropped to -4°C on April 7 and -6°C last night. The Mas’ white vines, despite all our efforts, were affected”.

A little later, the chairman of the Hérault chamber of agriculture, Jérôme Despey, recalled the hailstorm in August 2016, frost in April 2017 and the heatwave in 2019. On 7 and 8 April 2021, 40,000 hectares of vines – half the area’s vineyard acreage – was impacted by frost in just two nights. And scientists agree that it could happen again. 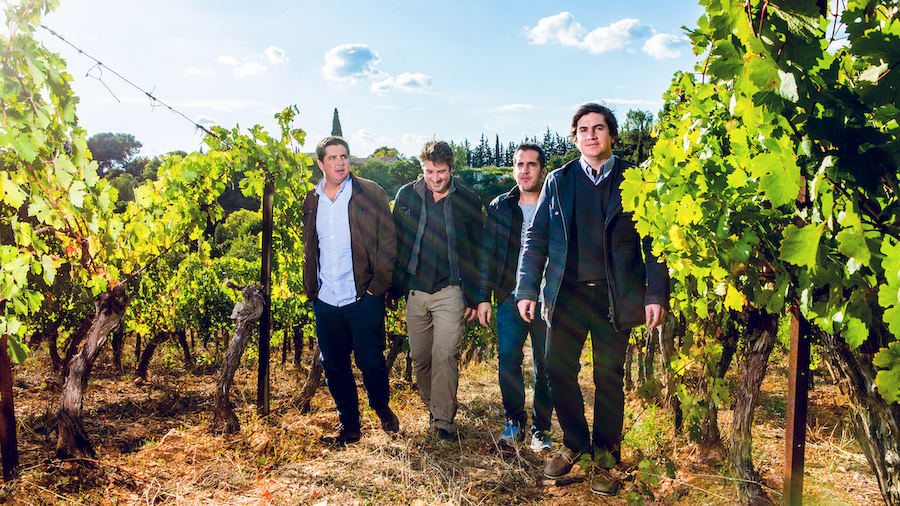 At Mas de Daumas Gassac in Aniane, Hérault, Roman Guibert would subsequently state that 70% of the Cabernet-Sauvignon vines had gone unscathed. “On the night of April 7, temperatures plummeted to -8°C across Languedoc. We were prepared. The cold snap affected the whole of France. We spent the night lighting fires, but vines cannot withstand temperatures of -8°C”, says Samuel Guibert at Mas de Daumas Gassac regretfully. Like his brother, Samuel praises work by his parents who were early adopters of massal selection in the 1970s. They used the technique to plant the estate’s vineyards in 60 small blocks surrounded by glades and woodland to preserve biodiversity, rather than clear the land to make way for an unbroken expanse of vines.

“Actually, we have always been practitioners of agro-forestry. Cabernet-Sauvignon is a late-ripening variety and it suffered less from frost than the white vineyards, particularly the Sauvignon blanc. The micro-terroir in the Gassac valley was an advantage for us. We lost 50% of the whites and just 10% of the reds, but without the forests that surround the estate and our micro-climate, we would have lost more, maybe as much as 75%”, claimed Guibert, a week before harvesting.

It’s not just frost – weather hazards are affecting all of France’s vineyards. By planting late-ripening varieties, Mas de Daumas Gassac is better equipped to cope with overripe fruit. “The profile of the wines has not been seriously affected by the heat. Compared with the 1980s, harvesting takes place one week earlier. Although alcohol content borders on 14% ABV for some red grape varieties, which was not the case thirty years ago, we have not noticed any phenolic over-ripeness. So, neither the flavour nor the profile of the wines has changed, even though micro-changes occur when there are unusual weather events”, explains Guibert.

Another of the estate’s strengths is its cherry-picked range of grape varieties, like the 0.25 hectares of Aréni noir from Armenia, or another currently fashionable, time-honoured cultivar, Nebbiolo. These varieties are part of the property’s genetic make-up rather than its desire to follow fashions. “Our parents’ ethos was to plant grape varieties from across Europe. We have around twenty grapes of differing nationalities. Research has focused on their performance for the past five years. Researchers have come to study our Portuguese, Italian and Georgian varieties but we need to wait for a decade until we have a reliable analysis of their evolution”, concludes Guibert. 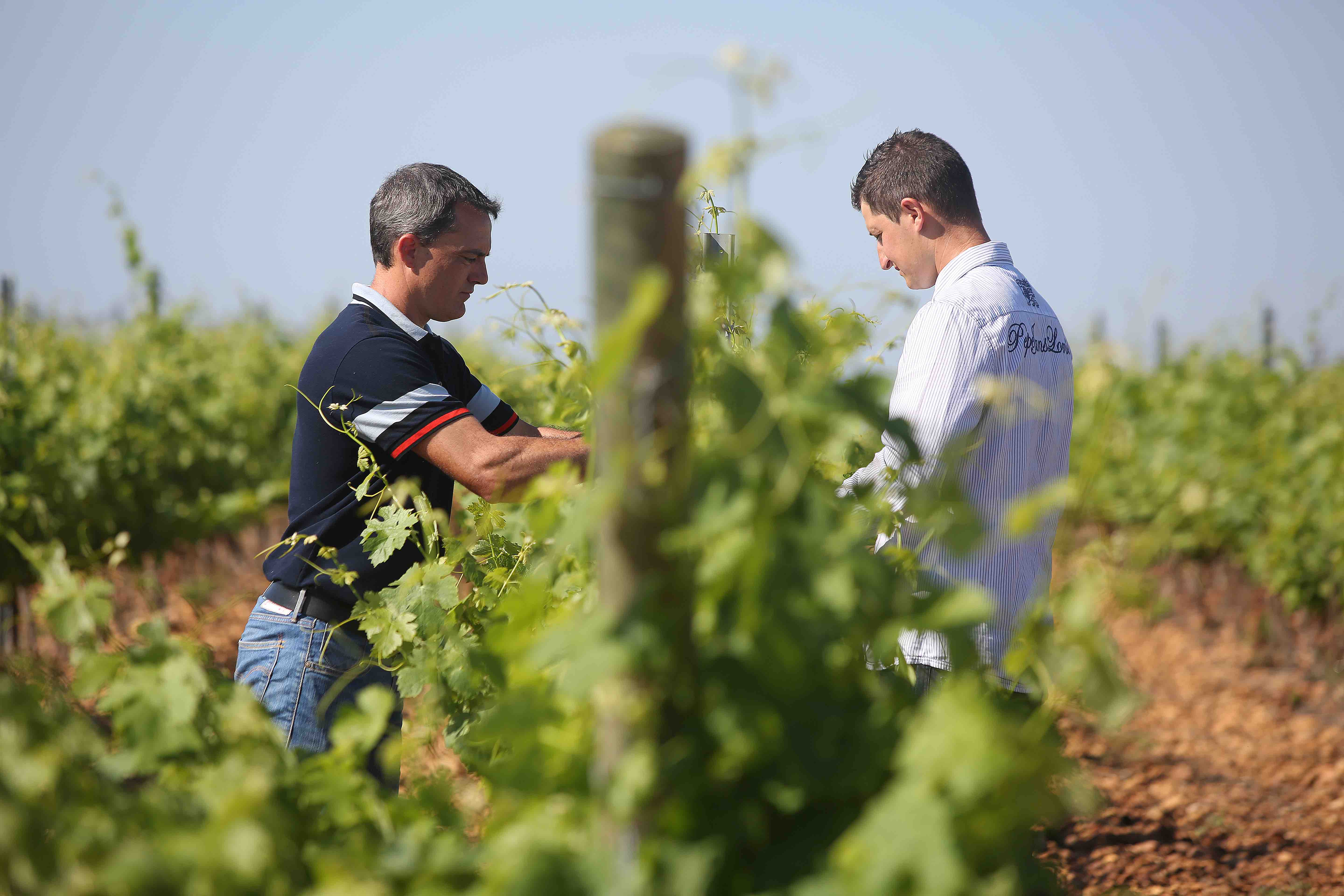 In Cers, near the town of Béziers, the Alma Cersius winery has received a shower of accolades for the range and precision of its varietal wines produced under the PGIs Pays d’Oc and Coteaux-de-Béziers. The group of 160 vine growers boasts 1,200 hectares under vine and currently produces 6 million bottles of wine, 80% of them bound for export markets. Through its single-vineyard selections, Alma Cersius has a finely tuned understanding of the aromatic profile of its wines.

The winery’s director and winemaker, Guillaume Bonzoms, is delighted by the progress made so far. “Irrigation allows us to improve our resource management and we have cut water usage by half. It mitigates freak weather events. We also have a very honed approach to varietals, with 8 types of Sauvignon and 10 styles of Chardonnay. This allows us to cater to a wide variety of markets”.

Although the choice of grape varieties is crucial, the group also focuses on other assets. “We enjoy a maritime influence which is very beneficial for the freshness of our wines. But terroir is also an important factor. Our strength lies in having clay-limestone soils, pebbles and Villafranchian terraces”. To reduce the use of pesticides, the winery has recruited an agricultural engineer tasked with monitoring the vines from a technical perspective. She constantly liaises with the winery’s members to give them advice. “Over the past two years, we have lowered our use of pesticides by introducing mating disruption, an alternative way of combatting grapevine moths. We have been awarded Level 3 High Environmental Value certification for all of our vineyards”.

At the Foncalieu co-operative group, agronomist Gabriel Ruetsch pursues the same objective: “Prevention is better than cure. A network of weather stations connected to sensors allows us to measure the soil humidity rate for precision drip irrigation to save water resources”. Not all the Languedoc wine region, however, has equal access to irrigation. "I don't hold out much hope for the future of farming in the Camargue. The Rhone is drying up, water is being pumped upstream and soil salinity is increasing”, laments one female Camargue winegrower. Among the avenues being explored to alleviate the issue of lack of water is treating and reusing wastewater. In Roquefort-des-Corbières, in Aude, the Vignobles Cap Leucate co-operative has fitted a wastewater treatment system to irrigate its vines. The pilot project, which offers a solution to the lack of water, has now set an example for the vineyards of Narbonne and the surrounding area, and co-operative groups are rolling out similar schemes. 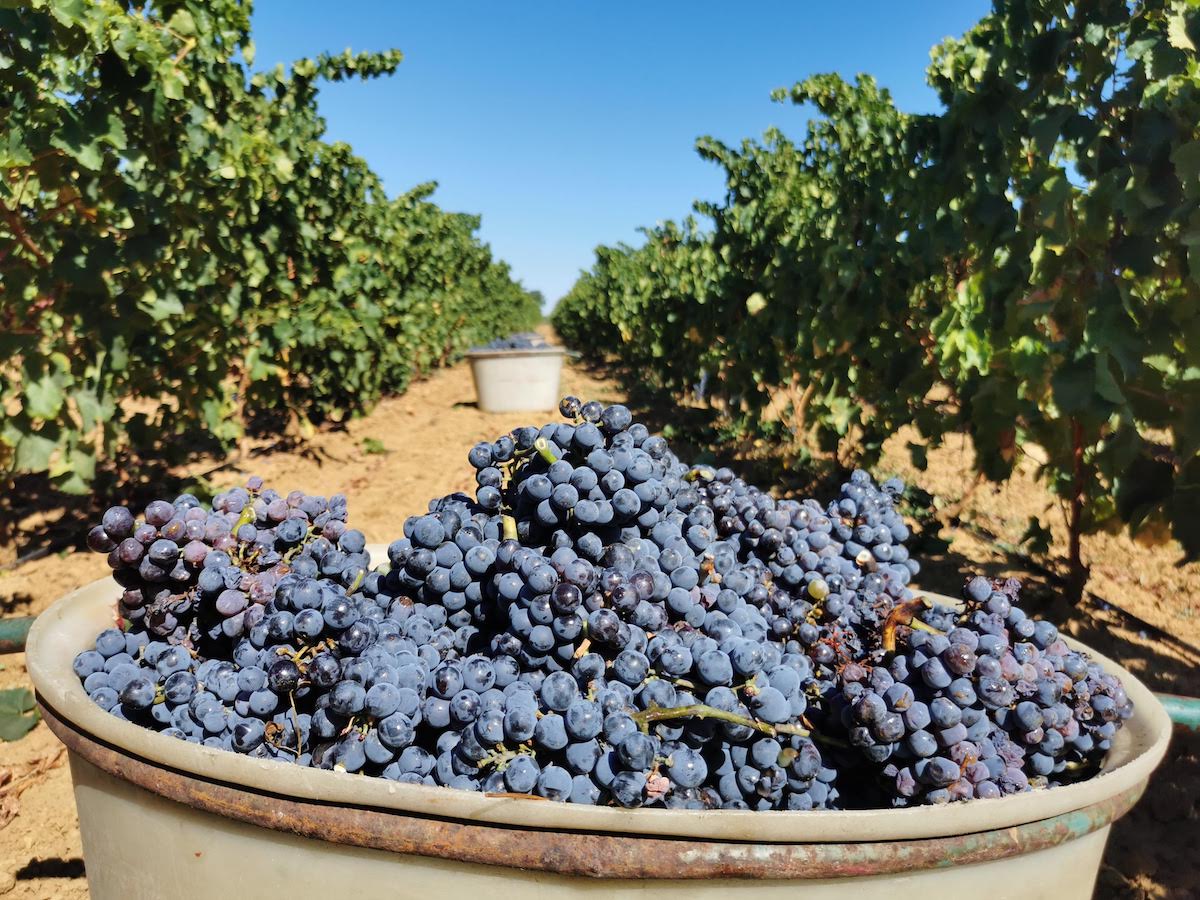 Provence is trialling a staggering 127 grape varieties resistant to fungal diseases and better suited to climate changes, but Languedoc is certainly not lagging behind on the issue. The National Institute for Agronomic Research (Inrae) and the French Vine & Wine Institute (IFVV) have partnered with marketing boards in Occitania and South-West France to launch the first regional experimentation programmes for resistant vine varieties. Grouping eighty regional winegrowing bodies, they have volunteered to study the resistance of vines requiring fewer plant protection products through more resistant genes.

The INRAE Pech Rouge and Cazes experimental estate in Aude offer resource facilities to support local wineries, such as the co-operative group Vignobles Foncalieu, whose commitment to sustainability already dates back over a decade. Founded in 1967 in Arzens, Aude, Vignobles Foncalieu posts turnover of €47 million from its 7,850 hectares under vine, and embraces Celliers du Nouveau Monde in Puichéric; Vignerons de la Cité de Carcassonne; Vignerons du Pays d'Ensérune near Béziers; the La Redorte & Castelnau d'Aude winery; and the Montagnac co-operative in Hérault.

The group has swapped widespread use of pesticides for alternative methods, whilst also choosing to plant resistant varieties from 2007. After a period of experimentation followed by conclusive trials, Vignobles Foncalieu marketed 3,200 bottles of wines from its first crop of resistant varieties in 2018. Called NU.VO.TÉ, the wine is red and made from new French varieties Artaban and Vidoc, which are still very much under the radar.

Since 2020, the wine has been certified organic and Vignobles Foncalieu expects to produce 15,000 bottles. “The varieties have the ability to ward off the main vine diseases and offer a response to challenging weather. However, it is still difficult to find markets for the wines, even if countries like Finland take an open-minded approach to them. Vignobles Foncalieu is delighted to have found an environmental solution, but is also giving thought to the style of future labels. “In 2021, we are focusing on rosé and are considering producing fashionable styles such as Pet'Nat, a natural sparkling wine”, reveals Gabriel Ruetsch, agronomic manager at Vignobles Foncalieu.

With 62 ha of resistant vines, the group is ahead of the curve for innovation. More importantly, it has reduced sprays and secured organic status for all of its resistant Artaban and Vidoc vines for the reds. For the whites, the German (Souvigné gris) and Italian (Soreli) varieties are already being grown, whilst the winemaking process for Floréal is being examined. “Depending on the vintage, no more than two or three plant protection treatments are used, compared with eight for vineyards farmed organically. Results with the Nu.Vo.Té label are encouraging. The 12°5 red wine shows a tight-knit texture and great natural acidity”, comments Ruetsch. 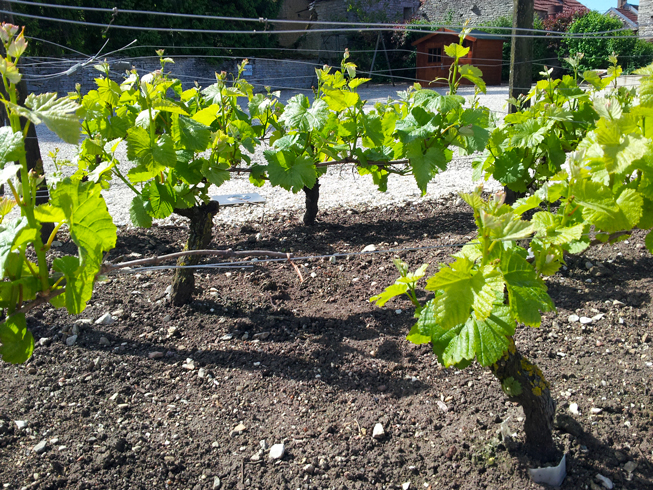 Good value Burgundy
For aeons, Burgundy’s Grands Crus, labels such as Montrachet, Romanée Conti or Chambertin with their often hefty price tags, have inspired wine enthusiasts the world over. But prestigious wines are not Burgundy’s only forte. We take a closer look at the lesser known side of the region’s wine range – the ‘generic’ Burgundies, which also have a terroir story to tell.

THE MULTI-TALENTED CATALONIA
Catalonia’s location provides it with all the requisite ingredients to create a plethora of varied terroirs, and climates. The changing landforms, too, spawn myriad types of terrain and microclimates. Combined, their diversity has led to the emergence of one of Spain’s most interesting wine regions. 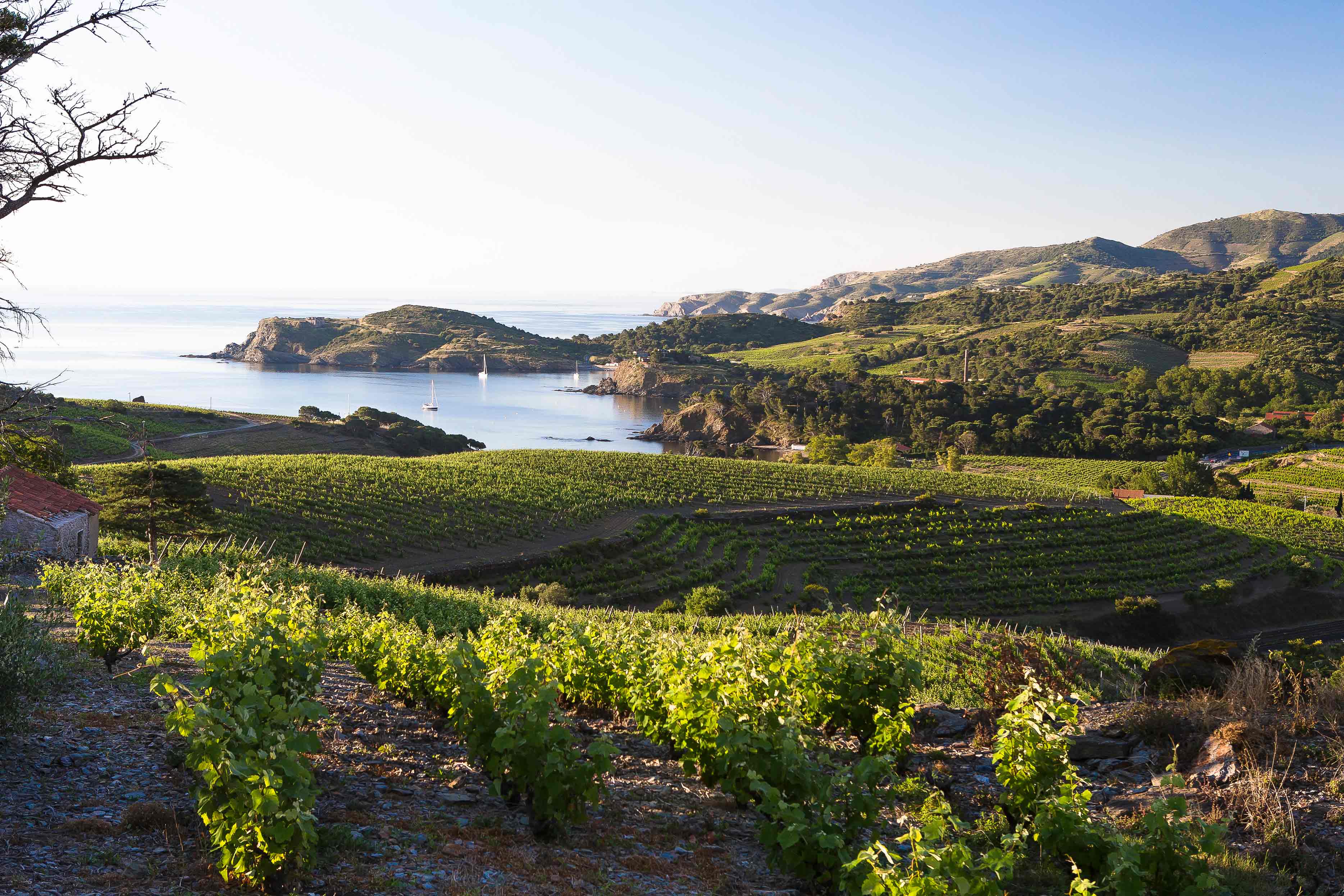 Roussillon sets its sights on the global market
Pyrenees-Orientales is France’s fifteenth largest wine region. Its dry and sweet wines draw on skills and an array of styles rarely seen elsewhere and they are the means by which Roussillon aims to conquer high-value markets outside the EU, whilst also remaining focused on trends.